(Clearwisdom.net) On May 12, 2007, the Divine Land Marching Band of Korea, consisting of Falun Gong practitioners, was invited by the organization H2O to perform for the "Children's Hearts" Festival held at the Parliament Plaza. Mr. Li Jingzai, the chairman of H2O and a parliament member, said that the performances by the Divine Land Marching Band are pure and healthy, and perfect for this activity--so H2O invited them to perform. 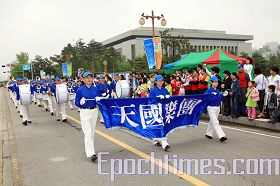 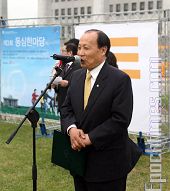 Mr. Li Jingzai, the chairman of H2O and parliament member

May, 2007 is "Family Month" in Korea, and the Korean Parliament opens Parliament Plaza for one day to support the "Children's Hearts" activity. More than twenty thousand people attended the activity.

The host of the activity introduced the Divine Land Marching Band to the audience: "The band consists of Falun Gong practitioners, who cultivate according to the principle of "Truthfulness-Compassion-Forbearance." The band has performed in many cities around the world, and today they are going to play the songs "Falun Dafa is Good" and "The Fa Rectifies the Universe."

The performances by the band were very welcomed by the audience.

The band was set up one year ago and has performed at many activities. Due to the pressure and lies of the Chinese Communist Party (CCP), many people in Korea didn't know the facts about Falun Gong.

Recently, the CCP tried to interfere with the Divine Performing Arts' performances in Korea, but failed. The CCP's evil behavior made people want to know more about Falun Gong and made many people, including the parliament members and H2O members, go to watch the art troupe's show. They wanted to know why the CCP is so afraid of a performing arts show.

Mr. Quan said that the world needs "Truthfulness-Compassion-Forbearance," so more and more people want to learn Falun Gong and more and more organizations are inviting Falun Gong practitioners to perform at their activities.

After the activity, Ms. Shen, a member of H2O and a famous violinist, telephoned Mr. Quan, saying "Your performance was excellent."

“Taiwan: One Sample of Many - Snapshots of a Chiayi Practice Site (Photos)”