(Clearwisdom.net) On April 25, 2007, Falun Gong practitioners held a candlelight vigil in front of the Chinese Embassy to commemorate the eighth anniversary of the April 25 appeal.

A Falun Gong practitioner read an announcement recalling the details of the April 25 appeal and how the Chinese Communist Party (CCP) launched the persecution. 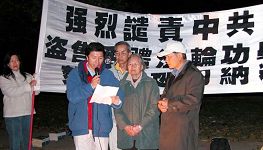 Ms. Li from Guangdong exposes the persecution using her own experience.

Dr. Fan, a practitioner, exposed the CCP's harvesting organs from living Falun Gong practitioners. He called upon people to read the investigation report written by Mr. David Kilgour and Mr. David Matas, which lists much evidence that points to the existence of organ harvesting taking place in China.

Ms. Chen from Tianjin and Ms. Li from Guangdong, who were both jailed in China because of practicing Falun Gong, exposed the persecution with their own experience. Ms. Li, with other practitioners, sued Chen Shaoji, the vice governor of Guangdong Province. She and her daughter were put in a prison in Guangdong, where they were tortured physically and mentally. She called upon people to quit the CCP and help to end the persecution.