(Clearwisdom.net) On April 28, 2007, the Veterans' Association in Quincy held a public forum entitled "Exposing the CCP's Harvesting Organs from Living Falun Gong Practitioners" in Boston. Mr. Michael Tsang, Michael David Feltz and Mr. Dee Lawson, the chairman of the Veteran's Association in Quincy, gave speeches at the forum, calling for the end of the organ harvesting from living Falun Gong practitioners. 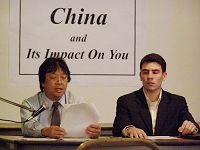 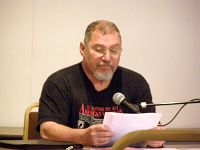 Mr. Dee Lawson, chairman of the Veteran's Association in Quincy

Mr. Tsang pointed out that many people have illusions about the CCP and think that economic development will bring democracy to China. He said that many businessmen are clearly aware of the human rights violations in China, but they still invest there. Mr. Tsang said that although China doesn't look like a communist country on the surface, actually people still don't have freedom there.

He pointed out that the American people don't understand the evil nature of the CCP, and if they want to know what the CCP is really like, they should read the book Nine Commentaries on the Communist Party, which influenced 21 million Chinese people to quit the CCP.

Mr. Lawson pointed out that the CCP has tried to open the gate of America and control the resource in the world with economic tricks. He said that the CCP always tries to cover its brutality with sham friendship, and the sister-city arrangement that Dengfeng City in Henan Province made with Quincy recently is an example.

Mr. Feltz clarified the facts that Jiang's faction persecutes Falun Gong and harvests organs from living Falun Gong practitioners. According to the investigation, the organ harvesting started in 2001, and peaked in 2002. Mr. Feltz quoted the investigation report written by Mr. David Kilgour and Mr. David Matas to prove the existence of the organ harvesting. He called upon attendees to stand up and help stop the persecution.