(Clearwisdom.net) On April 11-29, 2007, the "Truthfulness-Compassion-Forbearance" Art Exhibition was held at Meiling Gallery in Puzih City, Chiayi. On April 25, Ms. Huang Lichen, the mayor of Puzih, came to the exhibition. She was deeply touched by the artworks, and bought 20 sets of postcards of the art exhibition for her friends and family. She hopes that more people will learn about the beauty of Falun Gong and the persecution. 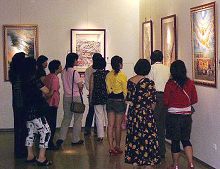 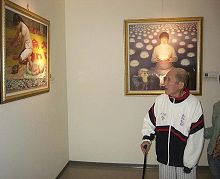 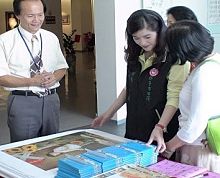 Ms. Huang Lichen, the mayor of Puzih, was touched by the artworks

Many government officials and citizens came to the exhibition. A college student told the reporter, "I feel like I am fighting the evil with my righteous power when I am looking at the artwork which depicts torture, and I feel peaceful and comfortable when I see a piece in which practitioners are meditating."

Forty artworks were exhibited, and all were created by Falun Gong practitioners who have enlightened to the truth of the universe and realized the true purpose of life through cultivating Falun Gong. What they are expressing in their art is what they have enlightened to.

Besides the beauty of Falun Dafa, the artworks also manifest Falun Gong practitioners' spirits, with which they bravely face the brutal persecution and spread the principles of "Truthfulness-Compassion-Forbearance" throughout over the world.

Some people told the reporter that they wanted to learn Falun Gong too, after learning that Falun Dafa has spread to more than 80 countries.