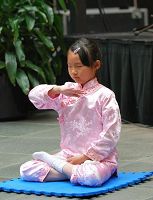 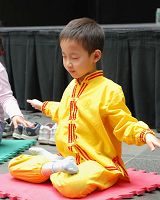 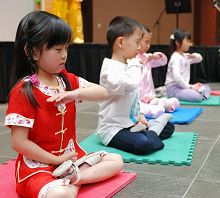 The Renaissance Art Troupe, consisting of Falun Gong practitioners, performed Chinese dances. The goal of the arts troupe is to promote traditional Chinese culture, which values truthfulness, compassion, loyalty and so on. They combine the Eastern and Western arts together and the performances were very much welcomed by the audience.

Iri learned the Chinese dances. He also learned how to say "thank you" in Chinese. He said that the performances were fabulous.

Mr. Michelle Wolfson brought his grandson to the show. He liked the Chinese performances, and he is very interested in Chinese culture.

Many people gave very positive feedback. Ms. Monica Thompson said that she loves Chinese culture and that the activity was fun.

“"Tiananmen, Please Tell Me" Touches Hearts of the Audience (Photos)”