(Clearwisdom.net) To celebrate the 15th Anniversary of Falun Dafa's public introduction, Falun Gong practitioners in Korea held celebration activities in the southern city of Daegu on May 13, 2007. Daegu is the city where Korean traditional culture is best preserved and has the largest number of Falun Gong practitioners other than Seoul. At dusk, the celebration activities held in Citizens' Park attracted a large number of Daegu's citizens.

The host of the ceremony said at the opening speech: "Today is the 15th Anniversary of Falun Dafa's public introduction and the eighth annual World Falun Dafa Day. Daegu is known for its people of high moral quality, so we're glad to hold this activity in this city." The audience responded to the host with warm applause.

Miraculous Experience of Obtaining the Fa

Mr. Song Rongzhen told the reporter that he began practicing Falun Gong in 1999. He said his experience of meeting with Falun Dafa was almost like a fairy tale. Mr. Song said, "There were many twists and turns in my life before practicing Falun Gong. I had gone deep in the mountains found many Daoists, but they said that it is the Dharma-ending period now. One of the Daoist brought out a book to show me. I only saw several golden words on the cover and then the Daoist smiled and disappeared. Afterwards, I began looking for that book. Just by accident, I found the book that the Daoist had showed me at a bookstore. That book is Zhuan Falun. I think nothing is more precious than this book."

Mr. Wu Yonggui is a monk who just began practicing Falun Gong last year. Since 1988, he has been studying Nie Pan Jing that talks about "the appearance of The Holy King Who Turns the Wheel." Mr. Wu said, "Only when The Holy King Who Turns the Wheel appears can be considered the appearance of the righteous Fa. I have been waiting for 18 years. Today, I have obtained the righteous Fa. I could not help shedding tears either when doing the exercises or reading Dafa books."

Mr. Wu Yonggui, "I have been waiting for 18 years. Today, I have obtained the righteous Fa."

The Same Cultivation in Two Different Circumstances, Revealing Even More the CCP's Evil

Gao Chengnu is Korean Falun Gong practitioner from Heilongjiang Province in China. She suffered persecution at a forced labor camp in China in 2004 but was able to come to Korea thanks to the rescue efforts of the Korean government and its people. She was able to marriy her Korean citizen fiancé. Ms. Gao talked about her feelings.

"I was released from the forced labor camp on May 13, 2005. This moment every year is a festival for Korean people, but in China, many practitioners are suffering the CCP's persecution, so I feel both happy and heavyhearted. How I wish practitioners in China coujld celebrate World Falun Dafa Day as do practitioners and people in Korea. How I hope that day will come soon."

Daegu City Council member Mr. Qin Tainan was invited to attend the activity. He expressed his sincere congratulations for World Falun Dafa Day and his gratitude that the ceremony for World Falun Dafa Day was being held in Daegu. He said, "I think Falun Dafa is a cultivation practice of body and mind for all Koreans. I hope more Korean people become practitioners and cultivate in this Dafa." 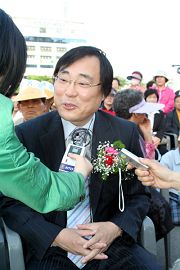 Daegu City Council member Mr. Lee Dongrun said, "One of my oldest friends is a Falun Gong practitioner, so I know this is a good practice beneficial to one's body and mind." He also offered congratulations on World Falun Dafa Day and expressed his hope that even more people could learn about the benefits of Falun Dafa.

Attorney Zhou Xuanlu said, "I heard that today is the 15th Anniversary of Falun Dafa's public introduction, so I had to come. Although I have not begun practicing Falun Gong, I have read Zhuan Falun twice. I know what Falun Gong pursues. This practice values 'Truthfulness-Compassion-Forbearance.' Its pursuit for truth is very moving."