Practitioners held a large-scale group exercise in Victoria Park at 7:00 a.m. After the exercises, a parade led by a waist drum team and large banners started at 10:00 a.m. Many citizens were attracted to it. 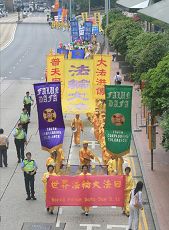 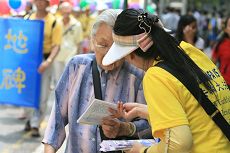 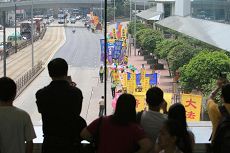 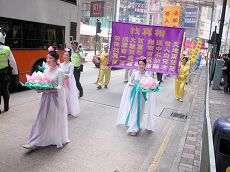 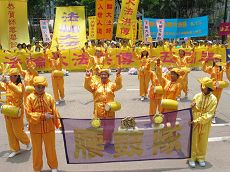 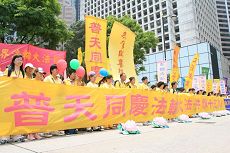 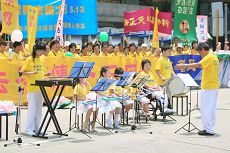 About 500 practitioners attended the activities this year. This number is the largest in the last few years. Hong Kong and Macau are the only places in China where people can freely practice Falun Gong. Compared to other countries, people in Hong Kong can feel the persecution directly. But the brutal persecution did not scare people, and many practitioners started practicing Falun Gong after the persecution was launched. Mr. Lin and Mr. Hong began practicing last year. They said that they learned about Falun Gong through the The Epoch Times.

Mr. Lin said, "Many people around me said that my temper is getting much better."

Mr. Hong, a new practitioner, also said that his family is happy that he improved his temper after practicing Falun Gong.

Mr. Jian Hongzhang, a spokesman for the Falun Dafa Association in Hong Kong said, "In 2000, May 13 became World Falun Dafa Day. Due to practitioners' efforts, more and more people learned the facts about Falun Gong and the CCP. We hope that more people will recognize the evil nature of the CCP and choose a wonderful future for themselves. We also hope that in the near future we can celebrate the World Falun Dafa Day in China."

Many people accepted the truth-clarifying materials, and some asked for more information about Falun Gong.

Mr. Jin Zhong, chief editor of the journal Open, praised Falun Gong practitioners' spirit. He hopes that practitioners will keep clarifying the facts and spread the beauty of "Truthfulness-Compassion-Forbearance" around the world.

There were three themes in the parade. The first one was "Falun Dafa is Good." The second is exposing the persecution, and the third is "Looking for the Facts" and "Restoring the Traditional Chinese Culture."

At the end of the parade, practitioners performed dances, songs and played instruments.

“Why Did the CCP Forcibly Remove TV Satellite Dishes in the Zhoukou Area, Henan Province?”