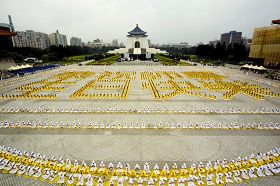 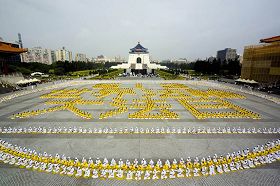 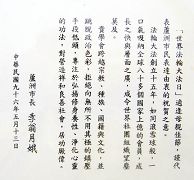 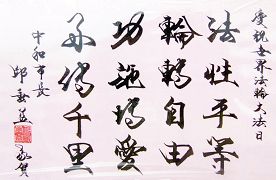 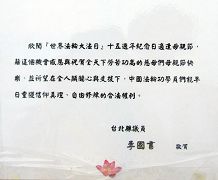 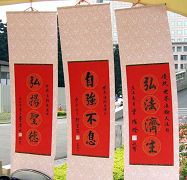 Ms. Huang Chunmei, a trustee of the Falun Dafa Association in Taiwan, introduced the history and background of Falun Dafa by saying that Mr. Li Hongzhi started publicizing Falun Dafa on May 13, 1992. In the last 15 years, Falun Dafa has spread to more than 80 countries. The practitioners assembled to form characters to celebrate this date. They also held a photo exhibition and art exhibition. 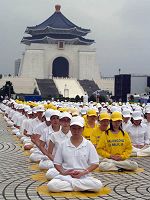 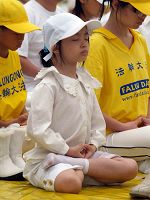 Architect Mr. Wu Chinghsiang designed the character-forming. He expressed that practitioners in China cannot hold such an activity due to the persecution, so practitioners do it in Taiwan, which can encourage people and let more people know about Falun Gong.

Mr. Wu said that the character-forming this year was the largest scale yet, compared with similar events held during past few years.

Regarding the eight-year long persecution, Prof. Chang Ching-hsi, a trustee and chair of the Falun Dafa Association in Taiwan, expressed his feeling that the persecution of righteous belief has never succeeded in history.

He pointed out that the suppression of Falun Gong actually promoted Falun Gong. He said, "Most practitioners in Taiwan started practicing after July 20, 1999. After the "April 25" Appeal, many media reported on Falun Gong, and many people learned about Falun Gong."

More than 1000 practitioners from Taoyuan came to the activity. Mr. Lin, one of them, said, "I used to work in China and developed a serious sickness. In April 1999, I saw the report about Falun Gong Practitioners appealing, so I wanted to try Falun Gong, and it healed my sickness."

Ms. Lin Hsingjuan, a music professor at Tainan University and Tainan Science and Technology University, said, "The activity today shocked me. This is my first time attending such a great activity. I am very touched to see so many practitioners getting together and wishing Master Li a Happy Birthday. It is very encouraging. I have more confidence to spread the Fa and clarify the facts of Falun Gong in the future." 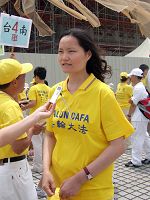 Fu Chiyuan from Chungli said, "I have been practicing for five years. Falun Gong helps me a lot both physically and spiritually. I was near-sighted, but now practicing Falun Gong healed it."

Ms. Hsu from Kaohsiung wished Master Li a Happy Birthday. She recalled her experience of being a member of the Divine Land Marching Band and about overcoming difficulties to spread the beauty of Falun Dafa through music. 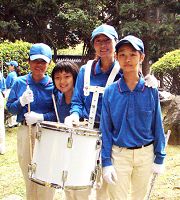 Ms. Hsu and her daughter

A nun, who started practicing Falun Gong in 1998, said that she has benefited from Falun Gong a lot, so the lies made by the CCP didn't deceive her. She said that she wanted to clarify the facts of Falun Gong with her own experiences and let more people know that Falun Dafa is good. 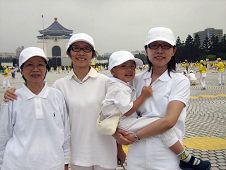 All the members in this family practice Falun Gong 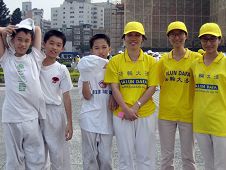 The triplets and their mother and sisters practice Falun Gong

Many tourists were at the memorial hall. Tourist Mr. Li said that he has a friend practicing Falun Gong, and he likes the high moral standard of Falun Gong. He watched the photo exhibition and condemned the persecution.

Ms. Chen said that she saw the report about today's activity, so she came to see it. She is interested in cultivation and values the high moral standard. She said that her purpose today was to learn about Falun Gong and to encourage Falun Gong practitioners.

Mr. Chian learned about the activity from the Internet. He is a student in the Physical Education Department at Hsinchu University. He asked many questions about Falun Gong and asked for contact information of the exercise site in Hsinchu. 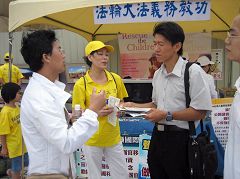 Many tourists from other countries watched the practitioners' demonstration. Many were interested in learning. 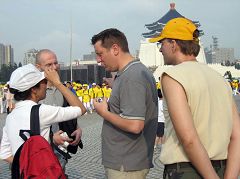 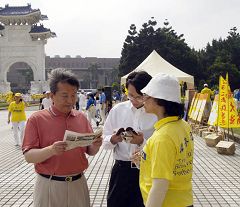 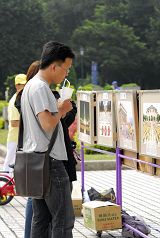 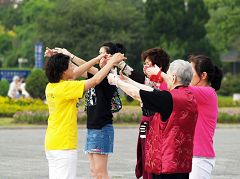 The Divine Land Marching Band, consisting of 320 Falun Gong practitioners, performed the songs "Falun Dafa is Good," "The Fa Drum" and "The Fa Rectifies the Cosmos." They paraded around the Memorial Hall Plaza.

This was the first time that the Divine Land Marching Band performed in public in Taipei, and many people were amazed by the band. They took photos and videos. Some citizens said that they were touched by the band. 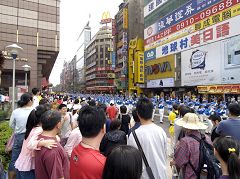 People were amazed by the band 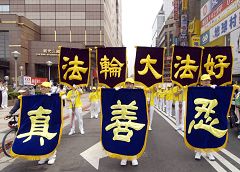 A gentleman was shocked when told that most band members started learning their instruments only a few months ago. Many people were attracted to the band, and asked more information about Falun Gong. 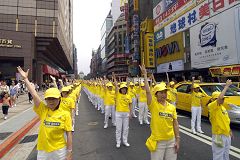 The activity ended successfully at 4:20 p.m.