At noon on May 12, 2007, Falun Gong practitioners came to Buckingham Fountain, one of the most popular landmarks in Chicago, to celebrate the eighth annual World Falun Dafa Day with a group practice demonstration. They also displayed selected pieces from the "Truthfulness-Compassion-Forbearance" Art Exhibition on the surrounding lawn, which attracted the attention of many passersby. Orderly exercise movements, coupled with peaceful music and solemn photos shone upon by beautiful sunshine, silently told of the Dafa validation journey that Chicago practitioners have walked during the past eight years of the Chinese Communist Party's persecution of Falun Gong. 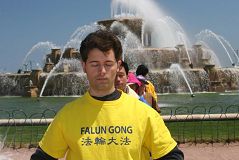 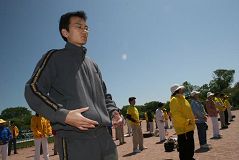 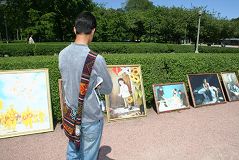 Among practitioners participating in the celebration activities this year were a number of practitioners from China, including Ms. Zhao. She said, "I have very mixed feelings. On one hand, I am very emotional, because this is my first participation in the celebration of World Falun Dafa Day outside of China, and this is our Dafa disciples' festival. On the other hand, my heart cries out for fellow practitioners inside China, because they do not have such an environment to publicly celebrate and have their own festival, and neither can they practice openly and freely as can overseas practitioners.

Ms. Zhao said that since May 13 was designated to be World Falun Dafa Day in 2000, practitioners inside China have overcome all kinds of difficulties to honor this celebration. On the first World Falun Dafa Day in 2001, Ms. Zhao and 60 other fellow practitioners celebrated at a practitioner's home. They quietly did the exercises around Master's portrait, and recited Hong Yin [a collection of Master's poems]. They told Master in mind that they would definitely cultivate steadfastly and follow Master to return home. On May 13, 2005, Ms. Zhao and 50 other practitioners celebrated World Falun Dafa Day at the residence of a practitioner who stayed away from home to avoid the persecution. Ms. Zhao said that one hour after they left the place, over one hundred plainclothes police came and surrounded the residence for three consecutive days. No one was arrested because they were very alert and left in time.

Many practitioners who participated in the celebration activities near the Buckingham Fountain were from Tsinghua University. Mr. Zhu, who is a senior manager in a large steel and iron enterprise, graduated from Tsinghua University over 20 years ago. He said that this was the eighth time that he and Chicago practitioners had celebrated World Falun Dafa Day. Mr. Zhu talked about why he began Falun Gong practice. At the beginning, Qian Xuesen, an icon in the scientific community, hosted a "Research on Human Body Science" in the late 1980s in the field of science and technology. This event included Tsinghua University, and many supernatural phenomena were discovered and discussed, which inspired Mr. Gao's interest in qigong. Mr. Zhou, who graduated from the Department of Precision Instruments at Tsinghua University, is currently a senior researcher at a chemical company. Mr. Zhou said that he saw clearly the CCP's evil nature from the persecution of Falun Gong.

Practitioners displayed many selections from the "Truthfulness-Compassion-Forbearance" Art Exhibition near where they did the exercises, for passersby to view. A student from Bhutan said that he was attracted by the image of the Buddha in one of the paintings. He said he was a Buddhist. Among the population of 700,000 people in Bhutan, over 99% of them are Buddhists. He said after learning about the CCP's persecution of Falun Gong that it was inconceivable. He thought about it for awhile and said that it is perhaps due to communism that such beliefs are not tolerated.

After finishing doing the exercises near the Buckingham Fountain, practitioners came to the South Chinatown Plaza to do the exercises and display Falun Dafa's wonderfulness to the Chinese people in Chicago.