Missouri: Mayor of the City of Creve Coeur Proclaims May 13, 2007 as World Falun Dafa Day

, Falun Dafa consists of four gentle exercises and a meditation that teach the principles of Truthfulness, Compassion, Forbearance (Zhen Shan Ren); and

, The free exercises of one's beliefs is an essential right protected by the United States Constitution and the persecution of the practitioners of Falun Dafa or any other religious or spiritual practice is an attack on basic human rights and should not be tolerated anywhere in the world.

In Witness Whereof, I have hereunto set my hand and caused the Seal of the City of Creve Coeur, Missouri to be affixed this 13th day of May 2007. 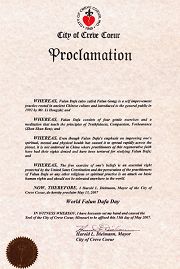 “Massachusetts: Mayor of the City of Malden Proclaims May 13, 2007 as World Falun Dafa Day”