(Clearwisdom.net) "I'm a member of Amnesty International. We are aware of this incident. Did you contact us? I'll take the information back. You've done well and right."

"I know some organizations in Finland pay attention to human rights issue, such as Red Cross. You can go to find them and they may be helpful."

"You've done well. The Finnish population isn't large. But if everyone comes to sign, it will be a great help." 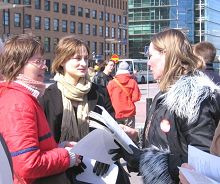 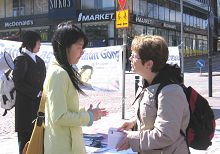 Three girls asked, "Is this persecution still going on? How to stop this horrible thing?"

Sunny, a Chinese student, told the people that no one knew her father's whereabouts though her mother tried every way to find him. What made them more worried was the live organ harvesting from Falun Gong practitioners to gain huge profits, which threatens Zhang Weijie's safety at every moment.

It was a sunny day. The feedback was quite good. Some read the details about Zhang Weijie's arrest and Sunny's rescue letter. Some read the banners exposing the torture of Falun Gong practitioners, and some wanted to learn more from the practitioners.

This activity also attracted many youth's attention. It was often to see several young people waiting to sign the petition letter. One young lady said, "I know that CCP only does bad deeds."

There were three girls whose parents were from Poland, Kosovo, and Astonia. Though their parents all once lived under the control of the evil communist party, these three children were born in Finland. They read the banners surprisingly and unbelievably, and asked the practitioner, "Is this persecution still going on? How to stop this horrible thing?" The practitioner explained the facts to them further, and said her father was also suffered under the control of evil communist party. The three girls all went to sign the petition after learning the true situation.

“Governor Bill Richardson of the State of New Mexico Proclaims May 13, 2007 as Falun Dafa Day”