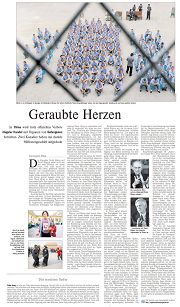 Canadians David Matas and David Kilgour do not look like two men who would pose a threat to any state, let alone one as powerful as China. The tall and slender Kilgour (64) smiles a lot and his bright blue eyes sparkle. Matas (66) who is smaller in stature, talks softly and quietly. He regards everyone seriously through his metal-rimmed glasses. They look like an unequal pair. They seem to share a professional, but never distant politeness and they both come from the city of Winnipeg. The former Secretary of State at the Canadian foreign ministry, Kilgour and the respected human rights attorney Matas, have crossed paths previously.

However, since May 24th 2006, they have become connected by something else. They found requests to conduct an inquest about a terrible accusation in their mailboxes. China was accused of removing organs from incarcerated followers of the spiritual movement Falun Gong on a large scale, in order to sell them at great profit to mainly buyers from abroad. The "Coalition to Investigate the Persecution of Falun Gong," a non-governmental organization based in Washington, D.C., had asked Kilgour and Matas to investigate these allegations. They eventually found so much evidence that it became almost impossible to discount the serious allegations. They carefully documented their detailed results and research in their first report published on July 2006 as well as a follow up report, in January 2007.

The lives of both men have changed since then: They have been traveling the world to pass along their findings. They speak at parliamentary hearings, in front of members of governing bodies, and at the United Nations. Right now, they are in Germany.

Things have been changing in China too, since Matas and Kilgour publicized their research. The Chinese government rejects all allegations that Falun Gong practitioners are used as a living organ bank. They claim that Kilgour and Matas are trying to "besmirch China's good image." After all, China will host the 2008 Olympics, and the government is especially concerned with its public image. Bowing to increasing pressure from international critics, they passed a law on July 1st 2006 prohibiting the trade in organs for the first time. From now on, potential donors have to give written permission in order to have their kidneys, pancreases, or corneas removed.

A Belgian Politician Pretends to Need to Buy a Kidney

Kilgour and Matas are convinced that the law has not managed to fundamentally change organ trading practices. "In China, there is a big difference between the existence of a law and the actual enforcement of the law," said Kilgour who visited the country often when he was still secretary of state. "The profitable business in human body parts continues unabatedly." A delegate to the Belgian parliament, Patrik Vankrukelsven, called two hospitals in Beijing at the end of Nov. 2006. He pretended to be in the market for a kidney transplant. Both institutions immediately offered him an organ for about 50,000 Euro.

Significantly, China's vice-minister of health, Huang Jiefu admitted in November 2006 that most of the organ transplants in China come from executed 'criminals'. "The black market portion of this business has to be prohibited," said Huang when talking to physicians in the South Chinese city of Guangzhou. Curiously, "these types of businesses" are supposed to have been prohibited since July 2006.

Kilgour who used to be a state prosecutor before becoming a politician admitted that they do not have hard evidence. Matas helpfully explained that there was a difference between a link in the chain of evidence and proof positive. "Our reports are based on the former. This is just the nature of the problem." The organs are taken out secretly. After the 'harvest', the bodies are cremated. Kilgour and Matas have asked for a visa to China in order to investigate the allegations but did not receive one.

A multitude of factors when viewed in combination resulted in their final opinion that the allegations could only be true. Followers of the Falun Gong movement are killed as a result of the operation or immediately thereafter. In other words: Murder due to organ harvesting. "We were often incredulous and we shrank from the conclusions of our investigations with terror" said Kilgour. Matas, who has represented many victims of the Holocaust, remembers the murder of millions of Jews: "Ever since then, it has been impossible to deny that barbarism happens."

It is amazing that in China there is very little awareness of the cruelty involved. Until last July, the Chinese hospitals openly advertised 'minimal waiting periods' for organ transplants on their websites. "It takes only about a week to find a suitable kidney donor," and "the wait will be one month, maximally" promised the website of the International Chinese Transplantation Support Center.

Transplant recipients in Western countries usually have to wait several years. The Transplantation Support Center listed the prices for organs: a kidney is $ 62,000, a liver $100,000, a heart approximately $150,000. After July 2006 all of these advertisements were taken off the websites. However, the physicians did not hesitate to make statements by phone: "We're only selecting the young and healthy kidneys," said Dr. Zhu from a hospital in the province of Guangzhou in April 2006. Several kidneys from Falun Gong practitioners were already said to be "in transit."

"Within this climate of hatred, imprisoned Falun Gong practitioners often fall prey to violence," said Matas. The UN-special rapporteur Manfred Nowak confirmed the findings in his report on torture from last year. In addition, the Kilgour-Matas report describes Falun Gong practitioners as the ideal 'donor population' because they are rather young and do not smoke or drink.

The main witness for the accusers is "Annie," the ex-wife of a surgeon who claims to have taken corneas from approximately 2,000 Falun Gong practitioners at the Sujiatun hospital in the Northwestern province of Liaoning. Based on her testimony, Kilgour who has interviewed "Annie" deems her to be a credible witness. He stressed that "she is not connected to Falun Gong in any way."

They think that it is especially telling that organ transplants have skyrocketed since 1999, the year when Falun Gong was outlawed in China. According to official estimates 18,500 organs were transplanted between 1994 and 1999, whereas the number jumped to 60,000 between 2000 and 2005. Kilgour and Matas surmise that doctors and hospitals earned huge extra profits with this outside business. The military must have made very high profits since they operate many hospitals.

According to the report, many prisoners were killed just to find a suitable organ for high paying customers. Kilgour met one man who was offered a total of eight kidneys at a People's Hospital in Shanghai. His blood type and tissue markers never quite matched those of the donors. The operating surgeon told him that his last, transplanted kidney came from an executed prisoner. "The waste of organs in China is enormous," says Kilgour. "The doctors can afford to be careless." There is always more supply because there are more than 1,600 executions every year.