At around 1:30 p.m., our compassionate great Master arrived, and right away the hall was filled with warm applause. All practitioners stood up and gave long applause to express their appreciation and delight in seeing Master Li.

Master Li talked for about three hours and explained again Dafa disciples' mission of saving sentient beings. Master encouraged Dafa disciples of the Fa-rectification period to do better in the final, limited time. 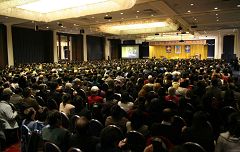 During the conference, ten practitioners shared their cultivation experiences.

Liang Tongxuan from New Jersey shared his experience of deterring notions in his mind and clarifying the facts at his company. He talked about his experiences, through which he realized that as an individual, one's personal wisdom and capability is limited. If one eliminates ordinary human notions and does things with the pure thoughts of a Dafa practitioner, Master will enhance his capability.

Wang Yiqun shared her recent cultivation experience: how to balance her work in society and validation of Dafa, how to get rid of the attachment of seeking personal advantage, and her overall changes through Dafa cultivation.

New York practitioner Katy Mantyk said that three years ago she came to New York from New Zealand. Later she joined the "Manhattan Truth-clarification" project and worked for the New Tang Dynasty TV station. She shared her experience of the work, becoming a wife and a mother, and getting rid of attachments.

New Jersey practitioner Ning Jianguo shared his experience of practicing the exercises outdoors for ten years, whether it was cold or hot. Cultivation and practice merge into one: in cultivation, there is practice; in practice, there is cultivation.

A western practitioner from Canada talked about how she noticed her attachment of "validating self" in following the Fa-rectification, and how difficult it has been to get rid of that attachment. When the Nine Commentaries on the Communist Party was published, she had the concept of "getting political" in her mind. She shared how she changed from not paying attention to local practitioners' efforts to working together with them.

Practitioners from New York's Elmhurst practice site shared their experience of stressing group Fa study and practice for several years and active truth-clarification in the area. In overcoming tribulations, everyone helped each other and shared experiences with open minds. Especially for this year's promotion of the New Year Spectacular, everyone was active and used their wisdom and capability. Thus, ordinary practitioners had extraordinary accomplishments.

Li Hongjin from Colorado and her husband are new practitioners who obtained the Fa in February 2006. She said, "Zhuan Falun is what we had been looking for our whole lives. Each word and each sentence is true." Before practicing, her husband had a severe spinal problem which was extremely painful. He had to use a wheel-chair and cane. After obtaining the Fa, he recovered not only from this condition but other illnesses as well. He also participated in the parade in March in California. Ms Li's daughter saw this and was so happy she purchased their plane tickets to attend future cultivation experience sharing conferences.

New York practitioner Han Suqiu shared what she had seen from her celestial eye: all the musicians became transparent, merged together and sent out magnificent gorgeous rays when the Divine Land Marching Band first recorded three songs.

At 6:00 p.m., the conference concluded. Practitioners were very happy to have heard Master's lecture. The experience sharing touched each one. Everyone encouraged each other, determined to move forward diligently. Everyone resolved to take saving sentient beings as their personal responsibility, and not let Master down.