On April 21, 2007, with the theme of "Joyful Celebration," the 60th "Great Flower Vehicle Parade" was held in Holland. The Divine Land Marching Band, a band consisting of European Falun Gong practitioners, marched at the front of the parade, leading the way with a piece of music specially composed by Falun Gong practitioners. Forty vehicles behind them in the parade proceeded slowly. 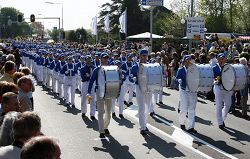 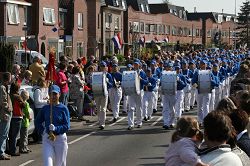 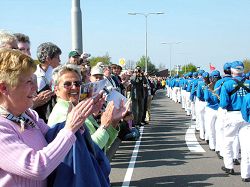 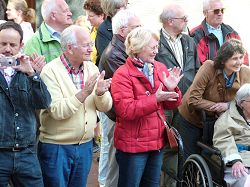 The Divine Land Marching Band was popular in the parade

Holland is world famous for its flowers, with the national flower being the tulip. The highest quality tulips and hyacinths are produced in a little town called Lisse. Every April during the spring, the large and beautiful Keukenhof Flower Show and Lisse Flower Parade are held. The flower show can be viewed for up to three months, but the flower vehicle parade lasts only one day.

The Falun Gong procession was divided into three parts: The Divine Land Marching Band, Celestial Maiden dancers and a troupe of waist-drummers. All were applauded warmly by an appreciative audience. The band at the front of the parade was highly praised: "There is indeed something of spirit in the music, which can make you feel spiritually sublime."

"Great, extremely good!" Chinese people working in Chinese restaurants along the parade route put their thumbs up, saying, "Your music is very good!"