Chicago: People from All Walks of Life Support the Twenty Million That Have Quit the CCP (Photos)

(Clearwisdom.net) People from Illinois, Wisconsin, Indiana, Missouri, Michigan, and Minnesota held a rally in Chinatown in South Chicago on March 31, 2007. They paraded around the Chinatown to support the twenty million Chinese people that have already quit the CCP, the Communist Youth League, and the Young Pioneers. Several people, including Falun Gong practitioners, gave speeches and exposed the CCP’s brutal control. They emphasized, “Knowing the facts is a predestined relationship. Quit the CCP for a safe future”. 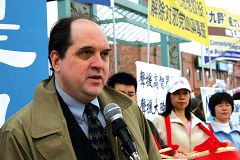 Stephen Gregory: The roots of that evil thing have been pulled out. Itis now only a matter of time until it topples.

Xu Min was rescued from Thailand to Chicago by the US government at the end of last year. She is from Shenyang. She exposed the CCP’s persecution of her five-member family. She said, “Seven years ago, I was in China. I was unlawfully sentenced to prison five times for practicing Falun Gong. My son was sentenced to prison for three times. I conducted a hunger strike for 26 days during my last imprisonment to protest the CCP’s persecution. The CCP ignored human dignity and deprived me of my freedom of belief. Fearing I would die in prison, the CCP threw me out of jail. I had no other choice but to flee. With the help of the UN human rights organization, I went to Thailand and met my family.” “I stand here today in hopes that my family's suffering can help more people to recognize the CCP’s evil nature and encourage more people to quit the CCP.”

“People everywhere will know the magnificent purity and goodness of Falun Gong.”

Human rights lawyer Terri Marsh wrote an article for rallies celebrating the 20 million that have quit the CCP entitled “Driven By Fear and Terror the CCP Is Crumbling.” In part it says: “CCTV has effectively created a network of lies about Falun Gong that encourages and incites the public, the police and other security forces in China to subject practitioners … to unlawful arrests and detention, illegal police interrogation and torture, and brutal forms of brainwashing and indoctrination techniques to force practitioners to renounce their beliefs and associations, and in many cases, to cause the execution of practitioners who do not renounce [Falun Gong].

“Recent history makes this point exceedingly well. The tactics used in the CCTV media reports and television shows are similar to those used in Nazi Germany during the Second World War, in Rwanda during the campaign of genocide of the Tutsi by the Hutu, and in the ethnic cleansing activities in Yugoslavia under Slobodan Milosevic. In all of these violent assaults and massacres, the propaganda operated as an integral mechanism without which the mass killing and violent assaults could not have occurred. Thus, as Peter Zvagulis notes, 'In the campaign in Yugoslavia against the Bosnians, in the campaign in Rwanda against the Tutsi minority, and more recently in the campaign in China against Falun Gong, not only is the message always the same (destroy them or they will destroy you) but the name of the mass crime that follows is genocide or ethnic cleansing.' From 'The CCP’s Hate Propaganda' on July 7, 2005 (available at http://en.epochtimes.com/news/5-7-7/30115.html).

“It is imperative that the people in China understand this, and especially those who themselves participate in the propaganda war that is being waged against FLG in China: CCTV has (allegedly) committed the very same crimes for which several Nazi war criminals were executed, because without the CCTV and other propagandists in China, the Jiang Zemins, Lou Gans and Li Lanqings would have no one to follow their orders to eradicate Falun Gong and purge it from China.

“As bad as it has been in the past, the CCP is behaving more irrationally in the wake of its own collapse. It knows well that over 20 million already have seen through its lies and refused to be a part of its organization. Like a serial killer that knows one day it will be arrested and brought to trial, the CCP is now especially driven by an irrational terror and fear causing it to commit more unspeakable crimes to conceal the crimes it must perpetrate to maintain control.

“But since the CCP is on the verge of a total collapse, it is only a matter of time before the True China will emerge and people everywhere will know the magnificent purity and goodness of Falun Gong.”

Quitting the CCP is the most effective protest

Political analyst Sanmei said at the rally, “The 'Quitting the CCP' movement is the most effective protest for us to deal with this cruel and irrational totalitarian regime. At the same, we need to not cooperate with the CCP’s propaganda.”

She continued, “As an individual, without personal rights, where is his dignity? As people, if we are denied our basic human rights, where is our dignity? The 20 million that have quit the CCP have made us see the sacredness of fighting for dignity... If none of the overseas Chinese attended any of the activities hosted by the CCP, including its celebrations and its performances, its venues would be empty. Then it would not have a market for its organized activities. If overseas Chinese media do not follow the CCP, if people do not read the CCP’s newspaper, then does its propaganda have a market? Can its newspaper continue? Similarly, if CCP members quit the CCP and everyone rejects this totalitarian regime, how can it face the people and the world? How can it manipulate people? Has everyone thought about the effect this will have? If a regime gets to this point, without any power, it is in the end. I believe this is the final fate for the CCP regime.”

She encouraged everyone to be responsible for their historical duty, just like the 20 million Chinese people that have already quit the CCP.

“The roots of that evil thing have been pulled out”

Stephen Gregory, a teacher at Chicago University, said: “Great events in the world sometimes happen suddenly. What seems to be permanent and unchangeable collapses overnight. People are amazed and astonished, as everything they know about the world is called into question. “Between 1989 and 1991, more than 2.9 million Party members announced their withdrawals from the Soviet Communist Part. Three million withdrawals marked the end for the Soviet Communist Party. I am here to tell you that 20 million withdrawals marks the end for the Chinese Communist Party. The roots of that evil thing have been pulled out. It is now only a matter of time until it topples. The movement to quit the Party is a movement to reject the evil of communism. It is an assertion by the people of China, one individual at a time, of the need to place conscience first, to follow the dictates of moral principle, setting aside fear and setting aside the chance to gain a little profit from a corrupt Party. This movement is a reawakening to what is most important in life. It is a realization that by seeking what is true, we seek what is best—for ourselves, for China, for the world.”

The whole world is discarding the CCP

The rally caught the attention of many tourists to Chinatown. Many Chinese people said that they had learned about quitting the CCP from the newspapers. A man from Northeast China said, “I am very supportive. I have never joined that organization.”

A Chinese working in a restaurant said after watching the parade, “Quitting the CCP is good.”

A person drove by, stopped, rolled down window and said, “Beautiful!”

Vadim Edelstein saw the rally when he came to Chinatown to shop. He grew up in the former USSR and knows the Communist Party well. He said, “They are a group of criminals.”

The Vietnamese American Community was preparing an activity to protest Vietnam's Communist Government sentencing of Nguyen Van Ly and other democracy activists to prison. They heard of the celebration activity in Chinatown and sent a special letter to congratulate the twenty million that have already quit CCP and to call on the whole world to cast off the CCP.