(Clearwisdom.net) To support twenty million Chinese people quitting the CCP and its affiliates, people from Montreal, along with Falun Gong practitioners, held a rally at Zhongshan Park in Chinatown at 3 p.m. on March 31, 2007. They marched in Chinatown and on a few busy streets in downtown Montreal. The march drew the attention of many spectators. Some of them even shouted along with the marchers, "No more Communist Party!" 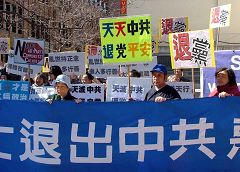 Posters of the cover of the publication "Nine Commentaries on Communist Party" were visible throughout the rally and drew many ethnic people's attention, particularly Chinese, who shook off their previous timidity and came forward boldly to read.

Many people stepped forward to deliver speeches at the rally. Fu Chen, one of the speakers said, "Twenty million is not just a simple number. It means that 20 million Chinese people have awakened. It means that 20 million Chinese have vetoed the CCP with their hearts. This indicates that the evil CCP has been pulled out by its roots. We want to cheer those 20 million brave people, because they are clear-minded and wise and followed their conscience. They safeguarded their true nature and human dignity with their actions.

Fu continued, "Someones said that the CCP is getting better. Is it getting better? It killed people publicly before and deceived everybody by claiming that those it killed were "anti-revolutionary." It kills secretly now, and is trying to deceive the entire world that this is the best period of Chinese human rights in history. Is this better? It has never given up violence and lies. Undercover it continued to cheat and brutally persecute the Chinese people. When we tear the cover off, there is nothing but ugliness and a fierce nature."


Mr. Dupre, a tourist from New York, and his four family members watched the march. He said, "The Communist Party has completely lost control. It has messed up the environment, not to mention its violations of human rights. There must be a righteous force to stop it. We hope that the UN can take concrete steps to stop it."


When he learned that there will be a larger march in New York next week to support the 20 million people who have quit the CCP, Mr. Dupre expressed regret that he would have to miss it, as he could not go back to New York right away. But he said that it would be nice to have a parade like that in New York.

Ms. Anna Manescu, a student of Urban Planning Department from the University of Montreal, took footage of the rally for long time as a topic for one of her projects. She asked for the website of the report on the live organ harvesting. ( http://Organharvestinginvestigation.net ) She told the reporter that she's from Romania and firmly believes the authenticity of the stories. "It's too brutal and must be stopped." She will tell the story to everyone she knows to help end the persecution.


Two Falun Gong practitioners narrated how their family members got arrested and imprisoned by the CCP in China for just practicing Falun Gong. Mr. Shen, a Chinese student, stated that his mother and three aunts were arrested and detained, and two of his aunts are still being held. The four sisters had severe illnesses before practicing Falun Gong, but their illnesses all disappeared after they practiced. Just because the sisters practice steadfastly, the CCP has tortured and humiliated them by tearing off their clothes, etc.


Ms. Yao Lian told how her husband, Mr. Ma Jian, General Manager in China and north Asia of the PCM Company of France, was violently arrested by a local police officer and more than ten special agents from the National Security Department on February 28 in his Beijing office. He's still being held. She called on all people of conscience for help in rescuing him.

The rally attracted more and more Chinese to stop and listen. Many Westerners gave the "thumbs up" sign to show their praise and support. The rally and march lasted over three hours.

“Chicago: People from All Walks of Life Support the Twenty Million That Have Quit the CCP (Photos)”