Holland: Rallies Held in Two Cities in Holland to Support the 20 Million Withdrawals from the CCP (Photos)

On April 21 and 22, over ten human rights organizations including the Epoch Times and the Service Center for Quitting the CCP (Chinese Communist Party) held large scale activities supporting the 20 million brave people who quit the CCP and its associated organizations. The theme of the event was "The evil CCP has been uprooted." On April 21, a parade was held in The Hague's Chinatown, Holland. On the following day, a rally was held at Museum Square in Amsterdam. Falun Gong practitioners also took part in the activity. Performing to support this event was the European Divine Land Marching Band, a waist-drum troupe, a group of women dressed as fairy maidens, and a group of flower-drums composed by hundreds of Falun Gong practitioners.  The organizers of these activities hoped that more people will break away from the control of the vicious CCP so that they will have a good future. 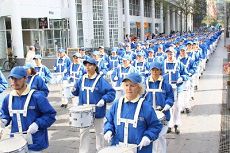 The parade supporting people who have quit the CCP and its associated organizations was held in The Hague's Chinatown, Holland 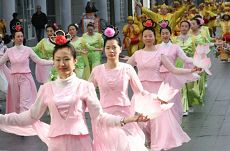 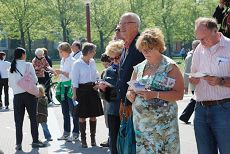 Since the Epoch Times released the book entitled Nine Commentaries on the Communist Party, people have started re-evaluating the CCP and have quit the CCP's organizations.  According to Service Center for Quitting the CCP, they have received not only a great amount of declarations of quitting the CCP from civilians in China but also telephone calls of quitting the CCP from officials inside the CCP's Politics and Law Committee. The number of people who have quit the CCP and its associated organizations reached over 20 million in such a short time as two and a half years, which has strengthened the tide of quitting the CCP.  During this activity, more Chinese people declared their withdrawals from the CCP.  Under the CCP's despotic rule, Chinese people have experienced numerous tribulations in many so- called political movements, in which, the number of people who have been persecuted to death has exceeded eighty million. Since the CCP started persecuting Falun Gong in 1999, the means it has used is even more evil: putting practitioners into prisons, involving their family members in the persecution, and sexual abuse; the methods of torture they have used on practitioners is over one hundred. Up to now, there are more than 3,000 confirmed deaths as a result of the persecution.  Recently, international independent investigators have also publicized an updated investigative report. More evidence has emerged: In China, the practice of systematically removing organs from living Falun Gong practitioners on a large scale is still going on.

At the rally, two Falun Gong practitioners shared that their relatives in China are being cruelly persecuted by the CCP. They called on people to see clearly the evil nature of the CCP, break away from it and save oneself by quitting the CCP.

A representative from the democracy movement also made a speech and said: "It is because of rice bowls in their hands that many people in China have not quit the CCP. At the same time, the CCP is controlling people by using the rice bowl. If people are becoming better off, they will begin to think about human rights issues and they will not be controlled, (so under the rule of the CCP,) it is impossible for Chinese people to prosper."

"Many people have to overcome many obstacles to quit the CCP, such as their families, employers and friends. These people have quit the CCP and they have not acted on impulse but have done it through careful consideration, which shows great courage," another speaker, Mr. Wang said. "20 million people quitting the CCP is a matter deserving congratulations. I hope that soon we can celebrate this on Tiananmen Square together with all Chinese people."

Chinese people are awakening; hired military officers have unstable minds and the CCP is falling apart. The evil CCP specter has been uprooted. The time when Gods will destroy the CCP is growing increasingly imminent because its root has been pulled out.  Please seize this fleeting opportunity and quit the CCP, and ensure a good future for yourselves.