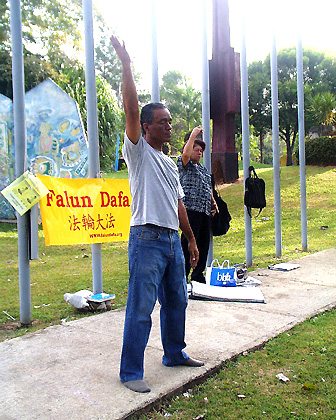 Panama City has no greater concentration of people seeking to live the healthy life than you will find every morning in Parque Omar. For a few --- the prizefighters doing their roadwork and the cops and firefighters trying to shed pounds so as to avoid losing their jobs for being overweight --- it's part of their living. For most of the joggers, walkers and people hanging out around the stands where you can get fresh fruit and vegetable juices, it's just a matter of wanting to feel better and live longer.

Along with people getting their exercise in more popular ways, every morning between 6:30 and 8:30 you will find another group, one that practices Falun Dafa, a series of four exercises and one meditation. "We are for slow exercise," explains Leonardo Mosley. "The human body is constantly changing cells --- slow, harmonious exercise makes cells that last longer."

So are we dealing with something like Tai Chi or yoga, an Eastern philosophy and practice of health that competes with American imports like the Atkins diet or Jane Fonda's workouts and old favorites like a run in the park?

Well, not just that. You see, in the land where Li Hongzhi first promoted Falun Dafa through his 1992 book Falun Gong, you can get the death penalty for exercising and meditating in this way. Doing your morning Falun Dafa workout is prima facie proof of membership in a [group] in the eyes of the authorities in the Peoples Republic of China.

"It's nothing bad," Mosley protests. "We have no religious or political aim --- only to better a person's being." Not only is Falun Gong not a religious congregation or political movement, he says, it has no membership in any formal sense. People come and go as they please, paying nothing, promising nothing and signing no lists. On the Thursday morning when The Panama News dropped in on them at Parque Omar there were six people exercising, but Mosley said that there are about 10 people come around frequently, but not all of them every day.

Panama has a substantial Chinese community, but most of the local group is not Chinese. On this day most of the little group was composed of Latin Americans of mixed race, with one Italian participating. Only one of the local Falun Gong regulars is of Chinese ancestry, Mosley said.

This is not for want of trying. Falun Gong has distributed literature in Chinese and Spanish in Panama City's Chinese neighborhoods, encountering mostly indifference but sometimes disdain and sometimes fear that any involvement here would invite persecution of relatives back in China.

So why would the comrades in the Politburo be so uptight about Falun Gong? Maybe it has something to do with the ethical principles summarized by three words in Chinese and Spanish on the literature that's passed out to the curious: Truth, Compassion and Tolerance. Anyone who aspires to be the ultimate arbiter of truth, judge of who's worthy of compassion and decider of who and what will be tolerated --- in short, anybody in charge of a totalitarian society --- might feel threatened by these principles.

But it didn't start out that way in China. Falun Gong's popularity spread quickly in the early and middle 90s, even among Communist Party members, eventually claiming more than 100 million people working out in public parks in every province of the Middle Kingdom.

But in 1996 the Chinese Communist Party's general secretary at the time, Jiang Zemin, banned Falun Gong literature. The persecution escalated and in the spring of 1999 the police started to break up Falun Dafa exercises in the public parks. Then that July there began a wave of mass arrests. Some people were confined in mental hospitals, others received long prison sentences and more than 1,000 were executed.

Prohibited in the land of its birth, Falun Gong spread to about 70 other countries, including Panama, Colombia, Peru, Chile, Argentina, Brazil, Venezuela, the Dominican Republic and Mexico in Latin America.

In Panama and elsewhere in the region, Mosley said, people of at least eight different nationalities have found "moral and spiritual support" in the Falun Gong group, in addition to a healthy exercise system that lowers stress and increases powers of concentration and self-control.

So how ancient or modern, traditional or radical, is Falun Gong? "Li was instructed by other teachers," Mosley said, although what he learned is "new to the West." In a tradition of exercise and meditation techniques that goes back to antiquity, he said, "Master Li is the newest teacher."

Apart from the vilification coming from Chinese communist leaders, Mosley added, people sometimes misidentify Falung Gong as a Buddhist sect. The first of the four exercises is called "Buddha Showing 1,000 Hands" and Li uses the word "buddha" in his writings, but the word is used in a different sense than the meaning ascribed by the followers of the tradition that Siddhartha Gautama founded under a banyan tree in Varanasi back in the 6th century BC.

"Falun Dafa... is a traditional Chinese self-cultivation practice," the brochure that Mosley handed this reporter said. "This old practice, which was originally taught in private, was introduced to the public for the first time in 1992 by Mr. Li Hongzhi."

And if you care to catch the deeper meaning of Buddha Showing a Thousand Hands, Falun Standing Stance, Penetrating the Two Cosmic Extremes, The Great Heavenly Circuit and Strengthening Divine Powers, stop by Parque Omar early in the morning and join the workout. Usually Falun Gong exercises under the sky near the parking lot, but in case of rain they move to one of the park's several shelters.

“A Region Searches Inward after Two Practitioners Are Reported and Arrested”