On April 18, 2007, in conjunction with Amnesty International, practitioners in Michigan held two forums about the Chinese Communist Party's (CCP) harvesting organs from living Falun Gong practitioners. One forum was held at the University of Michigan in Ann Arbor, and the other at Michigan State University in Lansing. Approximately two hundred faculty members and students attended. 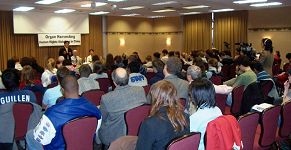 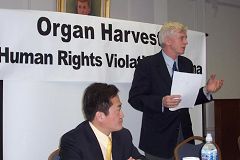 Mr. David Kilgour (right) calls for an end to the CCP's crimes against humanity

Mr. David Kilgour, a former member of Parliament and Canadian Secretary of State for the Asia-Pacific region, and Mr. Li Xiangchun, a Falun Gong practitioner, gave speeches at the forums. Mr. Li introduced Falun Gong and its spreading around the world to the audience. Then, he told the audience how he was tortured in a Chinese prison. He pointed out that to keep its power, the CCP dares to commit any kind of crime.

Mr. Kilgour told the audience that after he and human rights lawyer Mr. David Matas published their investigation report on the CCP's harvesting organs in July of 2006, they found 15 new items of evidence, which prompted them to publish a new independent investigation report ("Bloody Harvest," released in January 2007). He said that all the evidence together strongly points to the reality of illegal organ harvesting taking place in China. He pointed out that the new evidence indicates that the CCP's army is also involved.

Mr. Kilgour called upon the audience to take action to stop the CCP's crimes against humanity. He suggested that American hospitals not train Chinese doctors to conduct organ transplants, and that American patients not go to China to have organ transplants. Mr. Kilgour suggested that world citizens call upon their governments and athletes to boycott the Olympic Games in China in 2008. He pointed out that the crime of harvesting organs is against the Olympic spirit.

The audience was shocked by the truth exposed at the forums. Somebody asked about Western governments' attitudes. Mr. Kilgour answered that many Western governments cannot uphold the principles of human rights and democracy in the face of economic benefits.

A Korean doctor in the audience said that it is really brutal to harvest organs from living people. She said: "We should not hold the Olympic Games in such a country, and we should not do business with such a country."

James, from Singapore, said that he heard about Falun Gong before. He said, "It is a good time to exert pressure on the Chinese government before the Olympic Games." Another college student said, "It shocks me. It should stop. A tyrant's power is dangerous. We should take action to stop the persecution."

Mike, a businessman, said, "Western society should exert pressure on the Chinese government." He said that he would tell more people about the CCP's crime of organ harvesting.