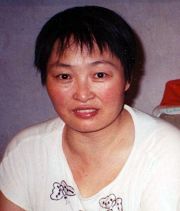 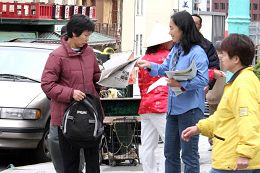 On the morning of April 21, a Saturday, Ms. Jiang and other Falun Gong practitioners clarified the facts in San Francisco's Chinatown and told people about the persecution in China. 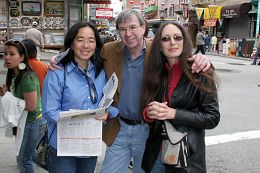 Practitioner Ms. Jiang Hong, living in the USA, heard of the news recently after talking with relatives in China. Ms. Cui's family member found out from the court in Hulan District, Harbin City that Ms. Cui had been sentenced to seven years' imprisonment. The court refused to provide a copy of the ruling, which prevents them from appealing.

Ms. Jiang said she knows Ms. Cui well. After practicing Falun Gong, Ms. Cui benefited both physically and mentally. She once said that belief in Truthfulness-Compassion-Tolerance is the most righteous thing.

Ms. Jiang said, "People like my aunt, who practice Falun Gong, should not be imprisoned. Good people are needed in this world. The CCP imprisons Falun Gong practitioners without legal procedures. The whole process violates the law."

After hearing the facts, Ms. Ana Zir, a program coordinator from the University of Hawaii, who was visiting Chinatown on vacation, said such a persecution of innocent people is incomprehensible. She said it is wrong to be imprisoned simply for possessing the Falun Gong books, and it is inhuman to persecute people believing in Truthfulness-Compassion-Tolerance.

Ms. Jiang said other Falun Gong practitioners who were arrested at the same time as her aunt include a husband and wife, Jin Chengshan and Jiao Xiaohua. The couple are both handicapped and cannot take care of themselves. The CCP's arrest of practitioners not only violates basic human rights, but is even more inhuman due to its abuse of handicapped persons.

Ms. Jiang emphasized, "Since the CCP initiated the persecution of Falun Gong, tens of thousands of practitioners have been imprisoned. I was especially shocked at the CCP's atrocities of organ harvesting from living Falun Gong practitioners, which was exposed last year. Such acts should never happen. I hope that more Chinese people with conscience and the international community will pay attention to the persecution of Falun Gong in China. This matter is not only about China. The trampling of human rights and the freedom of belief concerns everyone."

Ms. Jiang said, "I urgently request that the CCP immediately release Cui Xin and all Falun Gong practitioners. I hope more people will learn the facts and help stop the CCP's persecution of Falun Gong."

“My Experience Applying for Refugee Status in Austria”