n the afternoon of March 30, Falun Gong practitioners in the greater Washington DC area rallied in front of the Russian Embassy to protest the illegal deportation of UN refugees Ma Hui and her 8-year-old daughter, Ma Jingjing. After being deported back to China, Ms. Ma's whereabouts are unknown. As Falun Gong practitioners are being persecuted brutally in China, her condition is of serious concern. 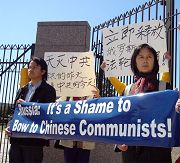 Dr. Huang, a NASA scientist, was the host of the event. He said: "This deportation was executed because of pressure from Chinese diplomats. Since the Chinese Communist regime has been relentlessly persecuting Falun Gong, DC practitioners and human rights groups are very concerned about Ms. Ma and her daughter's safety."

According to the Falun Gong Information Center, Falun Gong practitioner Ma Hui and her daughter were taken away from their home in St. Petersburg by the Russian Immigration Office on Tuesday (March 27) and put on an airplane, which was scheduled to fly China on the same day.

On March 29, Mr. Li, Ma Hui's husband, stated that deportation is a complex procedure, but the deportation of Ma Hui was executed very quickly. He believed that the whole deportation was well planned in advance. Every step of the process was unusual. There was a flight from St. Petersburg to China on March 28, so they took action on that day. They even bought the airplane ticket beforehand, but Ma Hui and her family didn't know anything before they were arrested. The Chinese Communist Party's fingerprints can be seen during every step of the deportation.

The deportation of UN refugees by the Russian government has attracted wide attention in the international community.

A member of the European Parliament who is also a former president of the European Union-Duma Cooperation Committee wrote to the Russian government, requesting cancellation of the deportation. He was very worried that Ms. Ma Hui would be arrested as soon as she got off the plane in China. He expressed that he could not imagine what would happen because Falun Gong practitioners are persecuted every day, including being tortured and their organs harvested.

Reportedly, the offices of some U.S. Congress members have called the Russia Desk of the State Department, requesting the U.S. Government to follow the development of this case.

Dancing with Evil Puts the Future of Russia in jeopardy

Falun Gong practitioner Mr. Zhang said: "Under pressure from the Chinese Communist regime, the Russian government violated its own laws and the UN human rights convention that it ratified by deporting UN refugees. The deportation was planned in advance and executed in just one day so that the international community had no time to respond. While Russia is a nation which was tormented by communism and has chosen to discard the communist system, it is very sad that the Russian authorities chose to violate both moral standards and laws to hand over an innocent mother and daughter to the evil Chinese Communist regime.

1. You arrested Ms. Ma Hui because you allegedly don't believe that the Chinese Communist Regime is persecuting Falun Gong. Now, after you learned that Ms. Ma was arrested immediately upon arriving in China, don't you feel sorry and guilty for your decision?

2. In 1991, you chose to discard communism as you knew it is evil. However, why would you send an innocent Chinese person back to communist China for persecution while you yourselves don't like communism regimes?"

Mr. Guo is an assistant professor of a research institute in Washington Metro. He said: "The Russian government was elected by its people and this means the government's behavior represents' its people. Unfortunately, if the government chooses to bow to the evil communist regime, this incident will not only involve the safety of the Falun Gong practitioner, but also the future of Russia. So, for the future of Russia, please reconsider your decision."