(Clearwisdom.net) A grand rally was held on April 14, 2007 on the large lawn in Hyde Park, Sydney, Australia, supporting the 20 million Chinese people quitting the Chinese Communist Party (CCP) and its affiliated organizations. Representatives from more than a dozen groups concurred that Heaven's elimination of the CCP is imminent. They advised Chinese people to quickly learn the facts, follow the celestial phenomena, break away from the CCP, and quit the CCP for their own safety. The Divine Marching Band composed of Falun Gong practitioners also came to the rally to perform for the audience, and participate in the parade supporting the grand trend of the "three withdrawals."

At the rally, Mr. Gao from the Sydney Service Center for Quitting the CCP announced that the 20 million brave Chinese people who have broken through the Chinese information blockade publicly announcing their withdrawals from the wicked CCP show that the root of the CCP evil specter has been pulled out. 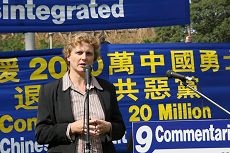 Ms. Tracy DeGeer, on behalf of the Universal Peace Federation says that no force is able to change people's minds when they are clear and free

Ms. Tracy DeGeer, on behalf of the Universal Peace Federation, made a speech at the rally. She said that peace and non-violent resistance movements are the most powerful resistance to a tyranny like the Chinese Communist Party. No force is able to change and suppress people's minds when they are clear and free. 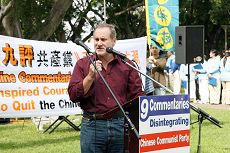 ERC President, Director of the Coalition to Investigate the Persecution of Falun Gong, New South Wales Branch, Dr. Phil Glendenning said that today's rally was to express the hope that China will become independent, strong, and respect human rights in the future, and will work together with the world to respect people's freedom of belief and freedom of speech. 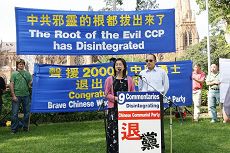 China's famous liberal jurist Yuan Hongbing said that the current movement of quitting the CCP is the forerunner of liberation for Chinese people. The quitting the CCP movement launched by the Falun Gong practitioners will be appreciated forever in history.

A former CCP diplomat who defected from the Chinese consulate in Australia in 2005, Mr. Chen Yonglin, said that quitting the CCP is a matter concerning all Chinese people. He also supported the validity of the data of quitting the CCP, and called upon people to get free from the bondage of the CCP as soon as possible.

China Labor Party president Fang Yuan said that the time when the CCP steps down from the historical stage of China is imminent.

Australian Green Party Senator Kerry Nettle and member of the New South Wales Parliament Gordon Moyes especially sent statements to express their support for the rally and parade supporting the 20 million withdrawals from the CCP and its affiliated organizations.

Australian Green Party MP and spokesperson Ian Cohen said that the Greens have paid great attention to China's human rights situation. He believed that the reason for so many people quitting the CCP and its affiliated organizations is that the CCP is a political party that does not have any conscience. He was not in favor of hosting the 2008 Olympic Games in China because the Olympic spirit is about peace and cooperation. The CCP deprives its own people of dignity and basic freedom of belief and speech. He hopes the CCP's "Berlin Wall" will fall soon. Ian also disclosed that the CCP attempted to prevent government officials in New South Wales from attending the New Tang Dynasty's Spectacular show. He was disgusted by the CCP's actions and even more determined to attend the show. He thought the NTDTV's show was wonderful.

After the rally, the grand parade started with a police car leading the way. The grand procession was divided into three sections. The first section was the Divine Marching Band, behind it was the section opposing the persecution, and the last section involved people from all walks of life supporting the withdrawals from the CCP. The parade set off from Hyde Park, passed through the busy downtown Sydney and ended in Chinatown. Along the way, people in the procession shouted loudly from time to time, "Heaven Eliminates the CCP" in both Chinese and English.

Numerous visitors were attracted by the grand parade procession. They stopped to watch and take pictures. Many overseas Chinese people and tourists from mainland China were greatly touched. Many tourists from mainland China excitedly rushed into the procession, holding the placards together with others and asked their companions to quickly take a precious picture. A tourist from mainland China was moved to tears. It was the first time for him to see such a large-scale parade overseas supporting quitting the CCP. An elderly man said, "I understand the CCP more than you do. It indeed killed a lot of Chinese people. It should have collapsed long ago." Many people took the initiative to ask for flyers, and some people lent a thumbs-up to the parade procession.