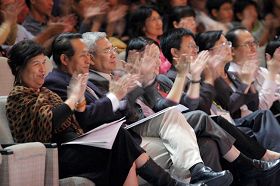 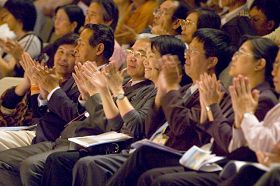 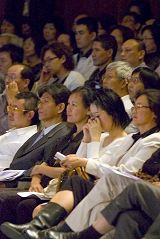 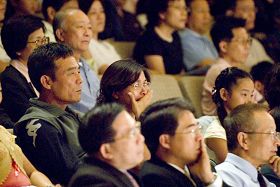 The audience touched to tears 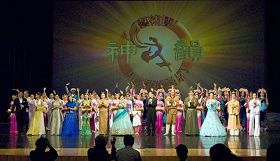 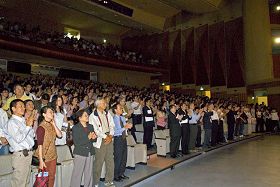 The audience applauds at the end of the show.

The performances are precious

Prof. Yu Kungchung, a famous poet and scholar, and former dean of the College of Liberal Arts of National Sun Yat-Sen University, highly praised the performances. He said: "Taiwanese are so lucky to have such a high level show. We should promote it and let more and more people know about it." 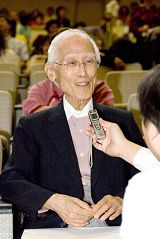 Prof. Yu Kungchung, a famous poet and scholar, and former dean of the College of Liberal Arts of National Sun Yat-Sen University

Prof. Yu said: "It is a pity that the Chinese Communist Party (CCP) ruined the traditional Chinese culture in the last decades. It is very good that the Divine Performing Arts from America is willing to promote the Chinese culture. The Chinese culture is our root, which can help us to purify our hearts and keep our bearings under the impact of globalization. The performance of the art troupe is really precious and we need to cherish it."

Prof. Yu was deeply touched by the dance about Yue Fei. He pointed out that the skillful dance choreography excellently told the historic story.

Prof. Yu said: "The show is fabulous. It told many historic stories and includes many minorities' dances. The background showed the beautiful mountains and rivers in China, which was touching."

Mr. Wu Xufeng, culture bureau chief in Kaohsiung, Mr. Lu Yuanhua, director of the Kaohsing Tourism Bureau, Mr. Wu Hongchang, and the conductor of the Kaohsiung Traditional Chinese Instrument Orchestra highly complemented the show. Mr. Wu Hongchang said that he could not hold back his tears during the show. He was amazed by the creativity of the choreographers; they made him proud to be Chinese. Mr. Wu Xufeng said that the show combined traditional art with modern elements, which is very impressive for him. Mr. Lu Yuanhua said that this show is not ordinary entertainment, for it manifested what kind of responsibility art should have for the society. He said that other art groups can learn many things from this show. 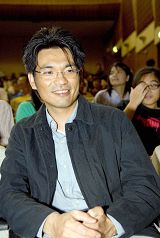 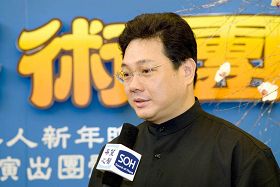 Mr. Wu Hongchang and the conductor of the Kaohsiung Traditional Chinese Instrument Orchestra 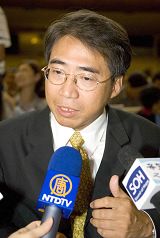 Mr. Lu Yuanhua said that he came to watch the show because he has been planning a show, which will be performed by college students and manifest the traditional Chinese culture. He found that the show by the Divine Performing Arts was much better than he imagined in terms of art design, spiritual elements and cultural content. He said that this show is a very good model, and art groups in colleges can learn a lot from it.

Mr. Lu said that the most impressive thing about the show is that it manifests the responsibility of art to society. He expressed that the skillful performances and profound content of the show melted audience's hearts.

Ms. Chang Hsiuru, art director of the Kaohsiung Ballet Troupe, appreciate the Divine Performing Arts for promoting the beautiful Chinese art. She was amazed by the energy and beauty demonstrated by the male performers. 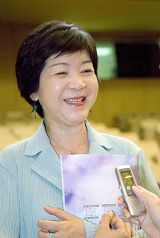 Ms. Chang said that after watching this show she would try to train her students with the traditional culture.

She complemented that the performers perfectly combined force and beauty together.

"I want to express their beauty with my painting."

Mr. Wang Haifeng, director of the Taiwan Art Institute and the vice president of the World Association of Artists, expressed: "The show is amazing. I want to express the beauty of the show in a painting. I never tried to express dynamic dance before in paintings." 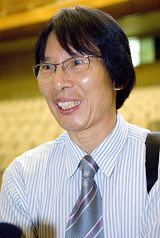 Mr. Wang Haifeng, director of the Taiwan Art Institute and the vice president of the World Association of Artists

"The beauty of the show transcends time and boundaries between countries"

Mr. Zhong Tiemin, a famous writer in Taiwan, came to the show. He was amazed by the dance "Creation." He said the beauty of the show transcends time and can break through spaces, and this particular dance described scenes in both earth and heaven.

Mr. Zhong said: "The young dancers are born in America, so it is amazing that they have such deep understandings of Chinese culture. So, I say that the beauty of the dance breaks through the boundary of countries." Mr. Zhong complemented that the show manifested the principle of "good will be rewarded by good and evil will be met with evil." 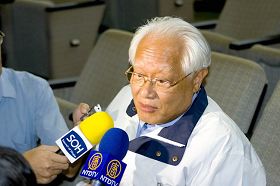 The show encourages respect for gods and Buddhas

Mr. Chang Jingchang, a dance teacher at Chungcheng Elementary School, said that the show encouraged respect for gods and Buddhas in his heart. He said: "In the modern society, the moral standard is getting lower and lower, and people don't believe in gods and Buddhas anymore. But through the show, I can feel that the benevolent Buddha is with me, and watching everyone with compassion." 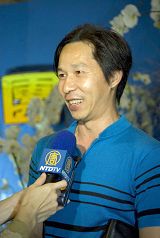 Mr. Chang said that the most touching dance is "A Dunhuang Dream," which showed that Buddhas and gods are protecting everybody in the universe.

Mr. Chang said: "The biggest difference between this show and others is that this show has the spiritual contentï¿½"the faith in Buddhas. Also, this show manifests traditional Chinese values through the dances, such as the ones about Mulan and Yue Fei."

Mr. Chen Chiahxin, the chief of the Pingtung Police Department, was impressed and touched by the dance, "To the Rightful Place," which told the story of a Falun Gong practitioner who was tortured to death by the Chinese police.

Mr. Lin Jianting, the president of Pingtung Hospital, said: "The dance, 'Creation' made people realize what the ultimate goal of life is. Human beings are from the heavens, and finally they need to cultivate and go back to the place where they are originally from."

Ms. Liao Shunhui, chief of the Fangliao Police Station, expressed that she cried many times during the show. She said: "Yang Jiansheng's singing was very touching, which reminds me of those Falun Gong practitioners who have been suffering in China. The dance 'Candlelight Vigil' also touched me to tears."

Mr. Yuan Jinzu, a government official working in the parliament, said, "The show gave me the feeling of peacefulness and appreciation for gods."

They both expressed that the show was very wonderful, and hoped that they can come to enjoy it again next year.

Next, the Divine Performing Arts will hold several shows in Taipei and Chiayi. Their next performances will be in Korea after April 21.

“Taiwan: A Rally Held in Hsinchu to Support 20 Million Withdrawals from the CCP (Photos)”