Divine Performing Arts is leading a tide, which is becoming more and more significant as the troupe stays longer in Taiwan. On April 13, 2007, the day of the last performance of the troupe in Taichung, audiences from Miaoli, Taichung, Changhua, Nantou, and Yunlin packed the Concert Hall of National Chung Hsing University, to watch the performance of Divine Performing Arts' New Year Spectacular. A record was set for any performance by a large performing arts troupe, filling the hall to capacity for three consecutive days. The last performance in Taichung concluded with warm applause and acclamation from the four thousand audience members, including those who had bought standing-room-only tickets. 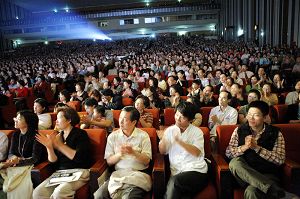 Divine Performing Arts presented the pure and graceful connotations of the most righteous culture of human beings. The performance cleansed and awakened the weary hearts of more than 12,000 people and moved the audience to tears.

Liao Yi-cheng, a financial legal representative and director of the Changchun Natural Disaster Prevention Foundation, said after watching the performance on April 13, "Watching the grand performance gave me a new, life-changing inspiration." Mr. Liao said, "The troupe brings a force to inspire society and leads people in a good direction. Each performance of the evening has its unique features and inspires our subconscious, besides showing the essence of Chinese culture."

Mr. Liao said he especially liked the numbers in the second half of the performance, saying that those were exquisite. He was especially impressed with the performance called, "Reaping What is Sown." He said, "The program inspires us to think about where we are going in the boundless maze. Humans should understand our rightful place, and know where we should return. One should know the direction of their life. In daily life, one should be clear about what one is doing and what the result will be. In this way, kindness is promoted and there is improvement in society."

Mr. Liao said that the whole performance inspired him. "We not only see ourselves, but see the vast masses. When we act from our inner hearts, it is just like lighting a candle. Living in such a manner will make our future glorious." 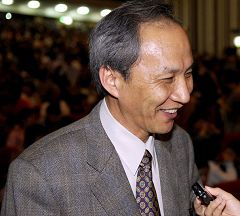 "I did not know if I could get a ticket. But I had the wish, and the gods arranged for me to come," said Hung Hui-hsian, who drove to Taichung from Taipei just to watch the performance. He said, "The dance, 'Creation' tapped my deep memory. As soon as I entered the hall, I was moved and had tears in my eyes. The feeling in my heart cannot be described with human language. Each performance was wonderful and carried deep connotations. I finally know the purpose of coming to the human world in this life. Jiang Min's song especially touched my heart. Though I don't fully remember the lyrics, I know I have a mission to come to this world. All the performances moved me to tears. It was after midnight by the time I returned to Taipei, but I think seeing the show was well worth it."

Divine Performing Arts makes me proud to be Chinese

Chen Mei-ling, Associate Professor at Daye University, said, after watching the show, that she saw the true spirit of the Chinese people. She described how she was very moved by the first performance of the show, "Creation." She said, "I am very proud to be Chinese. At my advanced age, I feel this pride for the first time." 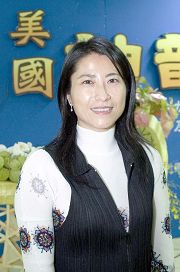 Chen Mei-ling, Associate Professor of Daye University, said after watching the show, "I am very proud to be Chinese."

Ms. Chen said the show promotes Chinese culture, besides a presenting a high level of artistic achievement. After seeing the show, she felt a special peace in her heart. She said, "I think it is hard to come by. Such a sense of serenity will stay in my heart for a long time." 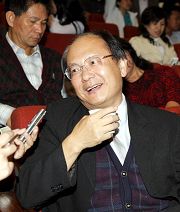 He said, "The show is perfect! Wonderful. It demonstrates the culture of different Chinese dynasties. After the Tang Dynasty, the culture is mixed and diverse."

He said that the program in the second half was the essence of the Chinese land. "Herding on the Mongolian Plains" shows Chinese people's open and bold character. It was an exciting performance. After listening to Guan Guimin's song, 'Finding Myself,' I thought about who I am. The most precious people are right beside me and I should cherish the predestined relationship with the people around me."

"A Dunhuang Dream" is very moving

Renowned sculptor Chu Lu-ching, who sculpts statues of Buddha, Bodhisattvas, and heavenly beings, said that the performance was very good in its composition, color and choreography. 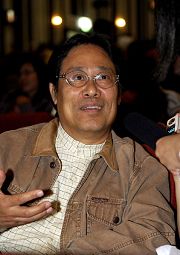 He said, "The traditional Chinese dance programs are very good." He said that the artwork in the Dunhuang caves is tops and represents the true Chinese spirit. Sculpting the statues in Dunhuang required inspiration, and it was moving to see the hints given to the pious sculptor, as shown in the dance, "A Dunhuang Dream."

The persecution of Falun Gong shows the CCP's tyranny

Taichung County Council member Yan Ling-hsuan pays attention to the persecution of Falun Gong in China. She said that the Chinese Communist Party's (CCP) persecution is useless, and people's rights and freedom cannot be deprived. 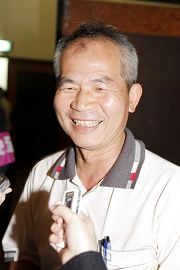 Taichung County Council member Gao Chi-tsan said that this kind of performance can elevate people's hearts and should be promoted widely. Each performance of the evening impressed the audience. Mr. Gao pays attention to the CCP's persecution of Falun Gong and to the human rights situation in China. He said, "The CCP's persecution of Falun Gong shows the CCP's tyranny. The persecution exposes many insights that were not known to the outside world before. The whole world now knows the CCP's evil nature."

Taichung County Council member Hsiao Chin-yi shared his views after watching the performance for two consecutive days. "The contents of the individual numbers are excellent. The performance brings the Taiwanese audience aspects of Buddha, the humanities and the arts." 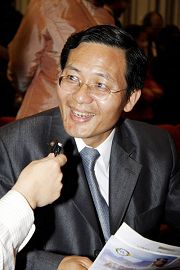 Hsiao Fu-dao, Director of the Land Redesign Engineering Bureau, said that each performance was very good and hard to express with language. He believes that it is great to present traditional Chinese culture through the medium of dance. Traditional morality, loyalty, filial piety, kindness, and love are the essence of our culture. Presenting them in the program is a difficult task. 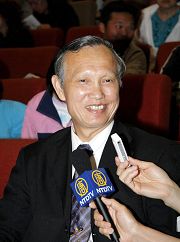 He said, "Nowadays the degeneration of education and morality is our responsibility [to reverse]. In TV we see how to educate children and hope that society and the nation will be peaceful. It would be wonderful if we could return to Tang Dynasty culture."

Huang Chen-wen, Dean of the College of Agricultural Resources at Chung Hsing University, said after watching the performance, "The main connotation of the whole program is that human beings should return to our original place. This is a deep connotation." 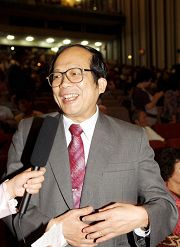 Professor Huang understood the message conveyed throughout the program, that humans come to earth to cultivate, in order to return to their true selves. He also appreciated the dance, "Reaping What Is Sown," where a Falun Gong practitioner is persecuted and killed and is received in Heaven by a Bodhisattva, while the perpetrators are punished. He said that the dance clearly conveyed the truth that good is rewarded and evil meets with retribution. 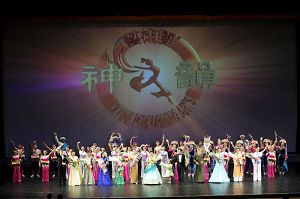 The performance of the Divine Performing Arts concluded in Taichung, and brought respite to the hearts of more than ten thousand people

Divine Performing Arts not only presents the spirit of the Chinese people throughout the different dynasties, it shows the essence of Chinese culture through the medium of dance. There is no dialog in the whole program. Through music, dance, song and the exquisite backdrop screens, the troupe brings to life the deep connotations of traditional Chinese culture. In China today and in other countries as well, such high level technique cannot be matched, especially using dance to present the teaching that good will be rewarded and evil will meet with retribution, to educate people to revive their kind nature and return to their true selves.

“Believe in Teacher and the Fa and Have No Fear”

“The Persecution of Practitioners in the Liaoning Province Women's Prison”