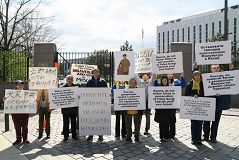 The practitioners at the appeal were from Moscow and surrounding cities. Twenty-five-year-old Yulia is an English teacher. She is very worried about Ma Hui and her daughter. She said: "Ma Hui and her daughter were illegally detained and deported to China. The daughter was born in Russia. She is a Russian citizen. Her father is still in Russia. The family shouldn't be separated. The persecution of Falun Gong practitioners in China by the Chinese Communist Party (CCP) is still very bad. I am really worried about them."

Ivan from Moscow said, "It has been eight years since the CCP launched the persecution of Falun Gong. It is very dangerous for Ma Hui and her daughter to be in China. Their residency in Russia was legal. There was no reason to deport them. It was very wrong. A human life is the most precious thing on earth."

Ivan said, "Falun Gong teaches Truthfulness-Compassion-Tolerance. It is good for any country and society. Falun Gong practitioners are good people. We hope the Russian government will help Ma Hui and her daughter return to Russia or help them get to a third country so their family can be together and they may have the freedom to practice Falun Gong."

Falun Gong is popular in Russia

Forty-four-year-old accountant Tatyana, who had been practicing Falun Gong for eight years, told the reporter that she has benefited from practicing Falun Gong. She said there are more Russian Falun Gong practitioners in Moscow than Chinese practitioners. Tatyana said, "The persecution of Falun Gong by the CCP is very cruel. It is an inhuman persecution. The CCP is doomed to collapse. Russia used to be a communist country. If Russia continues to pander to the CCP, it will put Russia's future at risk."

Zoia said, "I firmly believe the teachings of Li Hongzhi. I believe in Truthfulness-Compassion-Tolerance. I have been looking for the truth of life and was always curious about the purpose of life. Now I know it. Cultivation in Falun Dafa has become the most important part of my life."

Forty-two-year-old Ivan started practicing Falun Gong in 1998 when he was a translator in a Chinese company in Moscow. A colleague gave him a copy of Zhuan Falun.

Ivan said, "I used to know nothing but making money. I wasn't considerate. I had to have my way. After I started cultivation, I understood that humans have a kind nature and learned many profound things. I know that good will be rewarded and the bad punished. I have totally changed myself... the most terrible thing is that before I didn't know it when I did bad things. Now I know how I should behave."

Pity for the Chinese Who Don't Know the Truth

“Australia: CCP Threatens the Wife of a Tongsong Choir Member in China, Reveals Spies are Active in Australia”