Following its success in Taipei and Tainan, the Divine Performing Arts toured to Taichung and staged its first grand show in the Concert Hall of the National Chung Hsing University, the flagship of education in mid-Taiwan. The audience, who had been anticipating the show, came all the way from Yunlin, Chung Hua, Tsaotun, Hsinchu and other cities and counties by tour buses and cars. The line of people waiting to get in the concert hall became as long as 500 meters before 6:30 p.m. It was an unprecedented spectacular scene. Many VIPs gathered at the show. The enthusiastic audience filled the four thousand seat capacity of the hall. There was wave after wave of applause during the show. 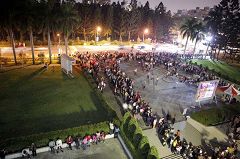 The Divine Performing Arts, an art troupe that has swept the world with traditional Chinese dance, caused a sensation with its performance in Taichung. The line of people waiting to get in the concert hall became as long as 500 meters. It was an unprecedented spectacular scene. 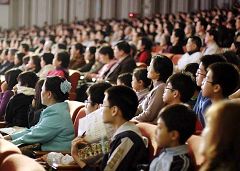 The Divine Performing Arts, an art troupe that has swept the world with traditional Chinese dance, caused a sensation with its performance in Taichung. The line of people waiting to get in the concert hall became as long as 500 meters. It was an unprecedented spectacular scene.

The President of the National Chung Hsing University, Dr. Chei-Fu Shaw, welcomed the top international art troupe to Taichung at the press conference. The National Chung Hsing University Concert Hall is the largest indoor concert hall in the city and the best choice for an international-level performance. He said his university, under the management philosophy of "Green Cultural Silicon Valley," welcomed such quality artistic entertainment. He had worked with Professor Chen Chun-ming and Professor Liu Cheng-yi to make the show possible. He wished the show a great success. 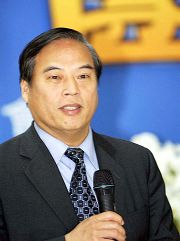 Most of the sixty-two artists in Divine Performance Arts are Chinese Americans. Tenor Guan Guimin, who has received several art achievement awards in China and overseas, said they have performed close to eighty shows in more than thirty cities. What was special about these shows was that they moved the audience to tears. The audience didn't shout as an excited audience usually would do. Instead, they watched quietly, clapped and were touched to tears. Mr. Guan said it was a response from the bottom of their hearts.

As the curtain opened, the first scene depicted a heavenly pure land covered in mist. A solemn dance featuring Buddhas and fairies followed. Many audience members exclaimed in surprise, "Gorgeous!" The influence of every dance was so strong that it touched the audience visually and spiritually. There were people sitting on the edge of their seats in every corner of the hall. They were afraid of missing any detail of the show.

The songs were unique and moved people to tears. Many who accepted interviews said their deepest memories seemed to be awakened through the show. When tenor Guan Guimin was singing, some people followed him to sing.

Mr. Chen said Chinese traditional culture was spread through the show on stage. He felt the Divine Performing Arts were not simply an inheritance from history, but also brought a brand new perspective to the world. He thought this kind of expansion of the Chinese tradition has brought the Chinese a new experience and way to identify with life.

National Policy consultant Mr. Huang Kun-hu said the show presented the beauty and elegance of eastern dance as well as profound cultural implications. "I think every performance was very unique and special. The show was wonderful! Every artist appears to have practiced very hard for a long time. Their performance was so natural that we felt so comfortable watching them. They all had smiles on their faces, even though some content was presented very seriously. It is very rare. Facing our current societies, this show is very relevant and this has encouraged many people to watch it."

Deputy County Director of Nantou County Chen Chi-ching said that the programs, from "Creation" to "Reaping What is Sown," to "A Dunhuang Dream" impressed him very much and were very creative. In dancing, what he was impressed with most was the costume design and beautiful colors, which cannot be found in folk dancing in Taiwan. "It is much better than general folk dancing," he said. 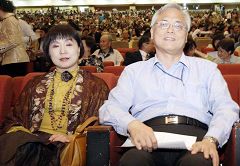 He also observed carefully and saw each dancer has his or her own action, not like general dancing where the gestures and actions are in the same order. He expressed his view: "It is very good and rare to see in Taiwan. All the performances were above the general level."

Mr. Chen said sincerely that to bring Chinese culture to a renaissance is the responsibility of our government and families, especially since currently young people have less and less understanding of traditional culture. The performance of the Divine Performing Arts plays a good role and its tour performance in other countries lets foreigners understand Chinese culture.

Chen Nan-yao: The costumes and dancing are perfect 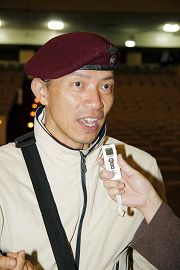 After hearing most of the dancers were born in North America, Mr. Chen Nan-yao said, "The teachers are great and train the dancers so well."

He thought that the costumes and dancing were perfect. For each program, the costumes fit the content. It is something to be admired.

After hearing most of the dancers were born in North America, Mr. Chen Nan-yao said, "The teachers are great and train the dancers so well. Their dancing was professional."

After watching the programs about Falun Gong, Mr. Chen said that Falun Gong is a peaceful practice. The presentation was gentle and graceful.

Professor: The performance of the Divine Performing Arts touches my heart and I was moved to tears

Professor Chen Wen-fu of the National Chung Hsing University said he welled up with tears while watching the program, "The Loyalty of Yue Fei." He believed that the program was very good in its expression of loyalty, filial piety, and righteousness. He said it can awake one's conscience and sense of traditional morality. He said, "It is really good. Nowadays utilitarianism prevails and science develops. People ignore spiritual development. Such performances can help revive the good traditions."

The costumes are very beautiful, Mr. Chen said, "I felt the colors like a rainbow." He has been to Dunhuang. He praised the program, "A Dunhuang Dream" in terms of its description and expression. Such a wonderful historical site was almost destroyed in the Cultural Revolution. It is a pity.

Mayor: Taiwan has the good fortune to host the Divine Performing Arts

Mayor Yu Wen-chin of Taiping City said he had never seen such a good performance. He watched many performances and none of them moved him so much, especially the backdrop screen. Mrs. Yu said she thought that the songs were pre-recorded and later she found that the singers sang on the spot. The singers held the microphone far away from their mouths, indicating they had profound skill. She liked each program and thanked the organizers for inviting the Divine Performing Arts to Taiwan. "It is Taiwan's good fortune," she said.

Mr. Hou Shou-feng, director of the Art Exhibition Review-Waiver Writer's Association in Taiwan, said that the programs of the Divine Performing Arts are different from what he saw before. For "A Dunhuang Dream" and "Reaping What is Sown," he said: "Very touching, wonderful!"

Mr. Hou indicated that in the program "Reaping What is Sown," the backdrop screen and dancers cooperated to show how a Bodhisattva descends to the human world and leads good people to heaven. The animation techniques are very special. Spectators can understand right away.

In the program "A Dunhuang Dream," besides rich and detailed scenes, the dancing, costumes and background integrated very well. When the dancers playing Buddha statues acted to give hints to the sculptor, the fairies and Buddhas in the caves shown on the backdrop screen were all moving. It was very well done and unique. "It was really worth the ticket," she said.

Dancing General Inspector: The programs broaden my view and I gained a lot

"Very good; worth to see again," said Ms. Wu Shu-hsian, dance educator and general inspector of the Changhua Dancing Troupe, after watching the first half of the show of the Divine Performing Arts. She appeared delighted.ï¿½ 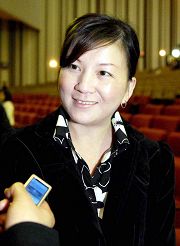 Ms. Wu Shu-hsian: The programs broadened my view and I gained a lot

Ms. Wu works on children's dancing education. She was impressed with the drama, "The Loyalty of Yue Fei." She said nowadays few people can present Yue Fei's story so well. Such kind of show can educate children to understand filial piety, appreciation and about making contributions to the country and society.

Ms. Wang Yu-ying, director of student affairs at Taiwan Sports College, watched the show with several of his friends prominent in dancing circles. She was impressed with the overall design, screen images, delicate design of the costumes, and the dancers' commitment.ï¿½

Ms. Wang said, "We were touched by the overall scene and the atmosphere from the moment we entered the hall. I think I watched something we had almost lost. It is rare to come into contact with the traditional culture. I think it is rare to see this kind of integration of modern technology and tradition."

Jewelry designer: When will I return to my true self?

Jewelry designer Lin Hsian-rong was touched by the performance. She said that she read reports about the Divine Performing Arts before attending and was afraid of crying during the show. She said that she was touched not only by the players' glorious costumes, but by the "Truth-Compassion-Tolerance" and beauty presented by the performers. After watching the show, she wondered when she would return to her true self.

She was touched by the performance of the erhu. She said, "It seemed to say that we have gone through much suffering. Thus, I cried quietly and discreetly got a handkerchief to avoid being seen by others, since everyone has different feelings."

Nun Huang Shu-chen from the renowned Catholic Hsiaoming Girl's High School expressed her acclamations after watching the performance. She pointed out it is so great for the Divine Performing Arts to promote divine culture across the world. 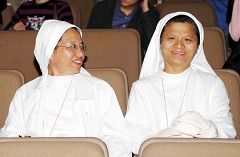 Nun Huang Shu-chen: For each dance, there were many dancers on stage, showing numerous graceful qualities

elegant facial expression and demeanor give people a pleasant feeling

Wu Wen-hui, director and financial legal representative of Yunlin County Hsinyi Daycare Center, brought children and staff to see the Divine Performing Arts, a total of about 40 people. Director Wu said that it was a world class show and it promotes traditional culture and values to the children.

Under the sponsorship of a businessman, a group of students from a dancing club and music class of Yunlin High School watched the performance. 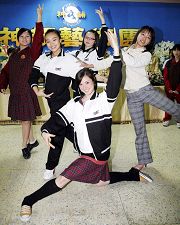 Students from a dancing club: "Chinese traditional dance makes one have peace of mind."

Student Chung Yu-hui said during an interview that the program she liked most was "Resounding Drums" since dancers had neat actions. Other students also said that they were impressed with the performers' facial expressions. They used an idiom to describe the performers: "Elegant facial expressions and demeanor give people a pleasant feeling."

The performance of the Divine Performing Arts is mainly depicting Chinese traditional culture. The members of the troupe use music and dance to demonstrate the five-thousand-year Chinese culture, which not only touched the deep hearts of audiences, but moved many of them to tears. The performances contain deep connotations which awaken people's memory of ancient truths.