(Clearwisdom.net) The Chinese Cultural Freedom Movement held its "2007 Special Spiritual Faith Award" Ceremony on April 8, 2007 at the Aotea Center in Auckland. The organization's founder, Dr. Yuan Hongbing, said that this is the first time that China's free intellectuals, in the name of a social historical movement, have raised a protest against the Chinese Communist Party's despotic rule for persecuting Falun Gong practitioners, and meanwhile, they also expressed their respect for the Falun Gong group. They hoped to do something to save the conscience of Chinese intellectuals through the award ceremony. 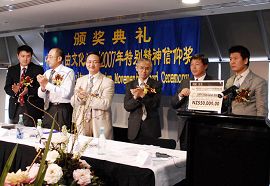 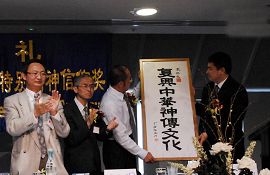 The persecution is heading for its ultimate defeat

A member of the Coordination Committee of the Chinese Culture Freedom Movement. Zhong Weiguang. hosted the award ceremony. Yuan Hongbing made a speech on behalf of the judge's committee of the organization. He said that from the end of the last century to the present, in the vast land of China, there has been taking place the most serious human rights disaster in the contemporary world: the political persecution campaign carried out by the Chinese Communist Party's (CCP)despotic rule against Falun Gong spiritual cultivators. The political persecution campaign has deeply hurt human being's conscience. He also said that the CCP's despotic rule has mobilized the entire nation's violent machinery, and brought state terrorism into full play, attempting to destroy Falun Gong spiritual cultivators' belief. But as of today, history has told us that the CCP's despotic rule is defeated, and is heading for its ultimate failure.

Yuan Hongbing noted that Falun Gong spiritual cultivators have resisted the tyranny in a peaceful and brave manner, and are gaining historical respect. He also said that in the face of the CCP's tyranny, which is even more vicious than the Nazis, the Falun Gong spiritual cultivators have protected their right of belief with a persevering, strong will. They have proven a truth: brute force is unable to conquer spiritual belief.

A spokesperson for Falun Gong, Zhang Erping, accepted the award on behalf of Falun Gong practitioners , and presented to the organization a plaque with calligraphy by Mr. Li Hongzhi, the founder of Falun Dafa, which read, "Reviving China's Divine-Inspired Culture."

Zhang Erping said in his speech that he was pleased to learn that numerous descendants of Yan and Huang Emperors inside China and abroad have been actively participating in reviving Chinese culture, and eliminating the CCP's party culture. Chinese civilization originated from a Divinely-inspired culture, but unfortunately has been subjected to the CCP's suppression. The communist theory that advocates violence and lies, and has been spurned by the Western civilization, is like a specter hovering above the vast land of China, and strictly and violently controlling every living being.

The appearance of the "Nine Commentaries on the Communist Part y"and the grand trend of quitting the CCP and its affiliated organizations have uprooted the CCP's foundation. Every Chinese person's recognition of traditional culture, including the efforts made by the Chinese Cultural Freedom Movement for reviving Chinese culture, have been powerfully disintegrating the CCP, and helping people get free from its control over their bodies and minds. This is truly a campaign that vigorously develops China, and recovers the national spirit.

Zhang Erping also said that people's support for Falun Gong in different ways, is not only support in a general sense and a moral support, but is people making a historical choice.

The first award of Chinese civilians and intellectuals

Zhong Weiguang said when issuing the award to Zhang Erping that he was very emotional, and he must try very hard to hold back his emotions. He had a lofty esteem for Falun Gong group, and he felt honored for receiving the plaque with calligraphy from Mr. Li Hongzhi.

Zhong Weiguang said, "Actually. We should have stepped forward at the beginning when Falun Gong was suppressed."

Zhong Weiguang also said that as an intellectual, or as a self-recognized Chinese intellectual with a social conscience, he felt grateful that they could step forward at this moment to issue this award and make their voice heard.

A member of the Coordination Committee of the Chinese Cultural Freedom Movement, Fei Liangyong, said in his speech that the CCP claimed it would eradicate Falun Gong within three months, but nearly eight years have passed, and "under the CCP's brutal persecution, Falun Gong has achieved greater development. This is a miracle! A Falun miracle! There are millions of people in China practicing Falun Gong, and in different places around the world, people can see many Falun Gong cultivators of different races speaking different languages. In particular, since Falun Gong was subjected to a large-scale suppression, Falun Gong practitioners overseas have been increasing at twice the speed. This shows that Falun Gong belongs to not only China, but also to the world. China needs 'Truthfulness-Compassion-Forbearance,' the world also needs 'Truthfulness-Compassion-Forbearance.'"

Fei Liangyong also said that the "Three Withdrawals" (refers to quitting the CCP Party member, Youth League, and Young Pioneers) launched by Falun Gong, put the CCP into a severe crisis of belief, organization and power, by urging the Chinese people to increasingly awaken, walk out of fear and break away from the CCP. As of today, more than 20 million people have quit the CCP and its affiliated organizations. If the Three Withdrawals continue, it will definitely lead to the collapse of the CCP.

Another member of Coordination Committee of the organization, Liu Yang, said that he sympathized with Falun Gong, because facing the entire moral degeneration in China's society, all descendants of the Yan and Huang Emperors should be deeply worried. Falun Gong follows "Truthfulness-Compassion-Forbearance," which is conducive for Chinese people to uplift their moral standards.