(Clearwisdom.net) On the afternoon of April 1, 2007, an activity to support twenty million people quitting the Chinese Communist Party (CCP) in Mainland China and the world was held on Town Hall Square in Copenhagen, the capital of Denmark. Lots of people passing by stopped to look, converse and discuss.

This activity was initiated by Denmark's Quitting the CCP Service Centre and various other non-governmental organizations in Denmark. Some of them were westerners who are passionate about Chinese culture, some were Chinese, concerned about the fate of the China, and some were from the media working for several newspapers, TV and radio stations. There were also some Falun Gong practitioners who have suffered the CCP's persecution.

Mr. Bill Andersen, a retired Dane of nearly eighty years, has been calling for justice for the persecuted people in China. His articles on China's human rights issues which expose the CCP's persecution of kind-hearted people are often published in many of Denmark's most popular newspapers. On that day he was there again, distributing material to passersby about the current tide of withdrawals from the CCP in Mainland China. 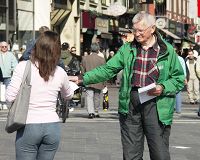 It was sunny and bright that day, and people were leisurely enjoying the pleasant weekend weather. There was an endless flow of people on the streets. Many people were intrigued by such unusual news that twenty million people have quit the CCP. They stopped by and came to find out in more detail.

On the central square of the oldest city in northern Europe, banners and signs caught people's eyes. An interesting selection of pictures which accompany The Epoch Times' series of editorials Nine Commentaries on the Communist Party depicted the countless tragedies under the CCP's reign of terror, and were shocking to the eye and touching to people's hearts. A loudspeaker relayed "The Nine Commentaries" in English, which reveals the Communist Party's crimes, vividly yet fully and accurately. Out of the tourists who come from all over the world, lots of them received a copy of "The Nine Commentaries on the Communist Party" in their own language. The organisers and participants of the event were very keen to put the latest news from China into people's hands and explain to people that this event happening in China is an important historical milestone, which is changing China's fate and determining China's future.

An end to the CCP is the wish of people around the world.

A gentleman from Norway said that in the past he was involved with helping Yugoslavians gain their freedom, and he knew a lot about the crimes committed by the Communist Party in Eastern Europe. Eastern Europeans have already escaped from the Communist Party's enslavement and very soon the Chinese people will break free of the evil CCP as well. He took away a copy of "The Nine Commentaries" in English, and planned to read it in detail.

A tourist from Nepal said that as he was living in China's neighbouring country, not only does he know a lot about the CCP's suppression of Tibetans, he has also deeply experienced how the CCP intimidates and terrorises its neighbours. The anxiety and dread is beyond words. When he talked about how the CCP does not want Tibet to become independent out of consideration for its own safety, the Chinese lady who was talking to him told him that the matter of the question is not about whether giving Tibet independence will affect the CCP's security, but the point is that with the CCP's unscrupulous nature it can never win anyone's trust. This feeling of unresolved and constant crisis makes it regard people of other religions as threats and there is no way that it can treat its neighbours with a sincere heart and live in harmony. After hearing this, the Nepalese tourist seemed to suddenly understand something. A quicker disintegration of the CCP is the strong collective wish of people in the neighbouring countries who have long endured the CCP's intimidation.

A Danish gentleman who was riding a bicycle stopped when he saw the scene and started to look at the pictures in detail. After gladly receiving a copy of "The Nine Commentaries" in English, he said that five years ago he took part personally in a parade in Hong Kong together with the citizens of Hong Kong to protest against the unreasonable and malicious law "Article 23". The way in which the conscience for democracy was awakened so quickly in the people of Hong Kong, even under the circumstances that their own rights were at risk, left him with a deep impression. He said that in the Western world, although some political figures are still holding their indifferent stances towards the CCP's violence for the sake of short-term economic profit, the CCP's threat towards world peace is being more and more recognised. For example, the CCP's aggressive and predatory policy towards the environment contrasts strongly with the Danish society's high respect for nature and Denmark's adoption of all kinds of ways to protect the environment. By doing this the CCP has also threatened the whole world's environment. All of these things are gradually waking up the people of the western world to the CCP's lies. 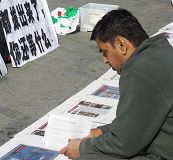 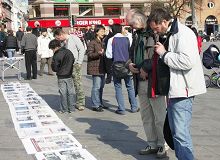 The hearts of Chinese people were shaken

On that day, there were also lots of Chinese tourists from all over the world and many local Chinese residents. When they saw the big banners which read in both Chinese and English - "Supporting twenty million quitting the CCP", "The CCP's roots have been uprooted, what are you waiting for?" and "Heaven destroys the CCP, quit the Party and save yourself, don't follow the CCP to the grave", the Chinese people were really astonished. In addition to those from Taiwan and Hong Kong, many tourists and students from mainland China are starting to accept materials and "The Nine Commentaries" booklets as well. The newest materials prepared by the organisers of the activity beforehand even started to run short. When people from Mainland China accepted the materials, when they saw the words "Chinese Communist Party is doomed" which were naturally formed on the huge rock in the Zhangbu region of Pingtang County, Guizhou Province, they could not express the shock that they were experiencing inside. It was apparent that their hearts were undergoing tremendous changes. Many people thought silently about the facts that they did not know before, and about the careful decision that they were going to make about their lives.

A young man from Mainland China said that he was a devoted Christian and because of his faith, he was forced to find a new life overseas. After a long and honest conversation with a lady from the Quitting the CCP Service Centre, he finally realised that in the past he was wrong to think that because he converted to Christianity, he did not need to make any further announcements about being part of the Chinese Communist Party's organisations many years earlier. Only by making an open statement to cut oneself off completely from the Party's vows, to wash the mark of the beast off cleanly, could one really free his heart. He quit the Youth League and Pioneers with his real name on the spot. 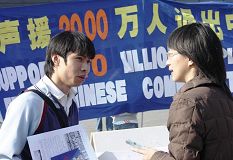 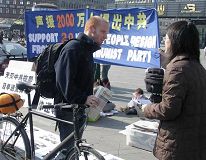 People listening to the facts

Liu Xiaotian is an orphan of Falun Gong practitioners. Because his parents refused to give up their belief in "Truthfulness-Compassion-Tolerance", they were both persecuted to death by the CCP in a period of five months. He underwent all kinds of hardships and fled eventually to Denmark. His story moved the hearts of many kind-hearted people in Denmark and around the world. Today, he took a break in his work to attend this activity. He said that if everyone stood up to condemn this malevolent Party, then tragedies like his family and tens of thousands of persecuted Chinese people would not have to be repeated again.

Twenty million brave people have quit the CCP, and "Heaven destroying the CCP" has become a certainty. People's decision on whether or not to quit the CCP will be a deciding factor in their own futures.

“The Persecution of Practitioners from Dongli District in Tianjin City”