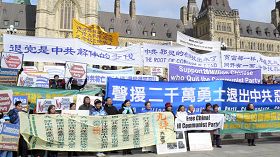 Rally on Parliament Hill to support 20 million withdrawals from CCP 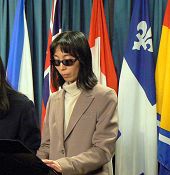 Ms. Zhang Jiyan, wife of a former Chinese Embassy staff, said: "A new China without the CCP is coming soon." 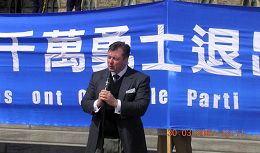 At the rally, the speech made by Ms. Zhang Jiyan attracted media attention as she is the wife of a staff of the Chinese Embassy to Canada and she spoke out to support people to quit the CCP.

A New China without the CCP Is Coming Soon

Ms. Zhang Jiyan, 48, is the wife of a former financial staff of the Chinese Embassy in Ottawa and is a Falun Gong practitioner. She was talking with others at the Embassy in private about the truth of Falun Gong. Embassy officials noticed this and started to monitor her. The embassy also wanted to confiscate her passport. Under mounting pressure, she decided to leave the Embassy on March 5 to avoid being sent back to China where Falun Gong practitioners are being brutally persecuted.

In her statement, Ms. Zhang said: "At this event supporting 20 million Chinese people who have quit the CCP and its affiliated organizations, I witness more and more people have awakened and chosen to denounce the evil party. In addition, I feel so happy because I am now a member of them and I can speak my heart-felt words publicly.

Ms. Zhang confirmed that the CCP uses embassies and consulates as bases to attack Falun Gong. She said that the Chinese Embassy in Ottawa has a special division which is specialized in collecting information of Falun Gong practitioners and dissidents.

According to Mr. Zhang, the Ambassador told them at an all-staff meeting that he had given slanderous materials against Falun Gong to the former Governor General, many MPs and government officials. Embassy staff keep tight control over Chinese communities in order to influence mainstream society.

"For example," Zhang said, "When NTDTV was applying to open a branch office in Canada in 2005, the Embassy manipulated Chinese groups and Chinese international students to write letters to related agencies trying to block NTDTV. In fact, these groups were just echoing the voice of the Embassy. In addition, the Embassy also spent large resources to instigate the Rogers Cable to block NTDTV."

Ms. Zhang hope that people around the world will not be deceived by the doomed CCP's disguised appearance.

"A new China without the CCP is coming soon," Zhang said.

Mr. Rob Anders, MP: "a great example and more people shall do the same"

MP Rob Anders gave a speech at the rally. He told reporters that Ms. Zhang's courageous move was very important and she had many stories to tell the public. He said that this was a great example and more people shall do the same.

In his speech, Mr. Anders commended all participants of the rally. He said that you have conveyed an important message to those who are being imprisoned, tortured and those in the Communist system.

Taking himself as an example, he said: Twenty years ago he won't believe if some one told him that people in east Europe will soon gain freedom and regain their rights of belief. So, he is very grateful that this rally can send out such a message, which will bring many hope.

In a letter to the rally, renowned Jewish scholar Rabbi Reuven Bulka said, "
As the world is unfortunately bowing in front of the economic juggernaut called China, we must not ever forget the brutality being inflicted by the Chinese regime."Â  He reminded that "
Doing business with such people is a moral capitulation, and is even bad business. People who kill will also cheat."

Dr. Bulka said, "20 million people quitting the communist party may signal the beginning of the end of oppression. This will be the case if we continue to encourage them, and others who will follow their lead.
Never give up. Mighty empires may seem invincible, but human will is stronger.
Courage and hope - these are the ingredients we need to succeed. God bless you all."

In his letter, David Harris, Senior Fellow for National Security with the Canadian Coalition for Democracies (CCD) wrote, "IÂ convey my congratulations to rally organizers as we all celebrate the reaching ofÂ this most promising milestone.Â Â With you, I salute those who have chosen freedom over Party, andÂ all others whose dream, work, and ultimateÂ achievement will assuredly be a free China."

The average rate of quitting the CCP is 30 to 40 thousand per day. In Canada, a series of events in about 10 cities are being held to celebrate this milestone and encourage more Chinese people to quit the evil party.