On April 22, 2004, Clearwisdom.net reported that Mr. Hong Wei, a Beijing University graduate and graduate student of the Chinese Academy of Science, was being persecuted. (http://www.clearwisdom.net/emh/articles/2004/4/9/46881p.html). After Hong Wei was illegally arrested he was detained for more than one year, and in 2003 the authorities secretly sentenced him to ten years in prison. He is presently detained at the First Prison in Chongqing. It is reported that he has been forced to work strenuously in prison. 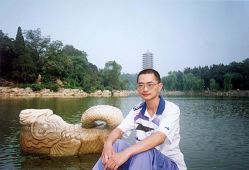 After he was sentenced, the police often came to harass his family, and their phone was monitored. His family members lived in fear for a long time. They said that after he had been gone for a couple of years, an old friend of his called to ask about him. As a result, as soon as he hung up the phone, his telephone and Internet service were immediately cut off and weren't restored for half a month. This friend was really terrorized and he is still too terrified to recount the incident in detail.

After the persecution of Falun Gong began on July 20, 1999, because Mr. Hong persisted in practicing Falun Dafa, he was repeatedly arrested, detained and subjected to brainwashing attempts. He was an important target, on the Chinese Communist Party's (CCP) blacklist. In January 2000, he was suspended by the Microbiology Institute and sent home. After he resumed his studies, the authorities at the Institute manipulated Mr. Hong's relationship with his long-widowed father, twice making his father travel to Beijing in order to pressure him into renouncing Falun Gong. Hong Wei's mother passed away when he was a child, and his father was so worried for his son that he became sick. In October 2001, Hong Wei was again suspended. Later, in order to avoid further persecution and arrest by the police, he was forced to become homeless. He led a difficult life, moving from place to place. In late 2001 or early 2002, Mr. Hong was again arrested. After having been detained without charge for more than one year, he was secretly sentenced to ten years in prison. Hong Wei is currently incarcerated at the First Prison in Chongqing.

“Crimes against Falun Gong Practitioners Committed by Officials and the Police in Cangxi County, Sichuan Province”

“I Experienced "If Thoughts Are Righteous, Evil Will Collapse"”