Canada: Toronto Resident Calls for the Rescue of His Brother in China (Photos)

(Clearwisdom.net) On March 2, 2007, Toronto resident Lin Shenli held a press conference in front of the Chinese Consulate and stated that a CCP Court in Shanghai, China has unlawfully sentenced his brother Lin Mingli to six years in prison. Mr. Lin called on the Canadian Government and the international community to help rescue his brother. 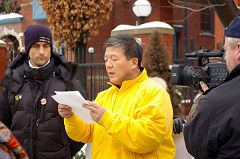 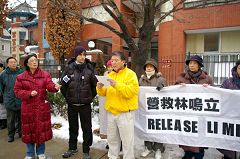 Between 9 to 11 a.m. on November 10, 2006, the Putao Court under the direction of Shanghai 610 Office unlawfully sentenced Lin Mingli, who put forward an appeal right away.

The whole procedure was a show trial. Mr. Lin Mingli's wife was allowed to enter the court after she requested to do so many times. All seats were occupied by people unrelated to the case, and she sat in the last row. Only two oral testimonies were read in court, and no witnesses showed up. Without witnesses or evidence, the judge sentenced Mr. Lin to six years in prison.

Mr. Lin Shenli said that after his brother appealed, the Shanghai Middle Court did not conduct any investigation, verification or hearing. A person named Yu Liang in the court informed Mingli's lawyer, "It is a simple case. No more hearings will be conducted. The original sentence is upheld." The lawyer asked to meet him in person, and he said it was not needed. Mingli is being held in the detention center and will be transferred to prison at any moment.

Mr. Lin Shenli is a Falun Dafa practitioner. He was unlawfully sentenced to two years in Shanghai and suffered many tortures. In 2002, he was rescued to Canada.

Mr. Lin said, "I appeal to the Canadian Government and all kind-hearted people to help rescue my brother and tens of thousands of Falun Gong practitioners being tortured in prisons and potentially killed."

Spokesperson Joel Chipkar of the Canada Falun Dafa Association said in his speech that since 1999, the number of documented deaths of Falun Dafa practitioners due to CCP police violence stands at 3,018. Experts estimate the number to be much higher. David Kilgour, former Secretary of State (Asia-Pacific) for Canada and David Matas, international human rights lawyer, released a report in July 2006 and confirmed the appalling fact: CCP conducts organ harvesting from a large number of living Falun Gong practitioners for profit.

Mr. Chipkar said, "We hope that the Canadian Government will place human rights first in dealing with the CCP regime and help rescue those Falun Gong practitioners who have family members in Canada."

Mr. Lin was persecuted for two years in a labor camp after being taken away by the Shanghai police for persisting in practicing Falun Gong. Over two years ago, he was rescued to Canada to re-unite with his family there.

“Indonesia: Practitioners Protest Against Persecution in Front of Chinese Embassy”