(Clearwisdom.net) On March 3, 2007, it was sunny and mild. In Human Rights Park beside Los Angeles city Hall, people with blue, yellow and white shirts gathered and there were several hundred banners. Nearly two thousands Falun Gong practitioners and people loving democracy and freedom held a rally on two themes: stopping the persecution of Falun Gong and celebrating nineteen million Chinese people quitting the CCP and its affiliated organizations. 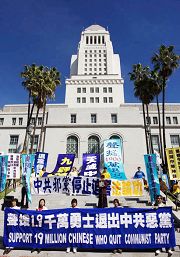 Falun Gong practitioners who were persecuted expose the CCP's atrocities

Ms. Dai Ying, 48 years old, came from Norway. She was imprisoned by the CCP for five years for practicing Falun Gong and recently obtained refugee status from the United Nations. During her imprisonment, police pried her mouth open with pliers, force-fed her through a rough bamboo tube, and shocked her with an electric baton. Her husband was imprisoned for four years for practicing Falun Gong. Her fourteen-year-old daughter suffered mentally and physically. Her mother passed away due to these incidents. She said, "The torture in prison led to blindness of my left eye and the loss of my teeth."

A lady practitioner, Tian Huiying from Maoming, Guangdong was persecuted into a mental disorder. Several police pressed her down to withdraw blood. She cried and yelled. Later she was tortured to death. The labor camp deceived her family, saying she died in a car accident.

The Crimes must stop

Falun Gong spokesperson Zhang Erping said in his speech, "Falun Gong does not get political but is conducting a movement to stop the biggest atrocity and crime in human history." He wished that all people would work together to stop the persecution.

Though the persecution is not stopped, Mr. Hong He, a commentator on current political issues, said, "Eight years ago, when the persecution started, Western media thought that under the CCP's strong persecution, Falun Gong would turn into an underground struggle. Look at today's situation: Falun Gong has spread to over eighty countries in dignity, while the perpetrators hide to commit crimes behind the scene."

He said, "In nearly eight years, the whole world has come to know the miracle of Falun Gong. Eight years ago, no one could think that Falun Gong would endure the persecution. In history, no person or organization survived the CCP's brutal persecution. Yet after eight years, everywhere one can see practitioners' truth-clarification and smiles. Falun Gong is welcome around the world. At the same time, people see the end for the CCP."

Eight years ago, people possibly asked, "How long can Falun Gong protest?" Now more people ask, "How many days can the CCP survive?" This is the "world miracle" that many religious people or prophecies pointed out.

Mr. Liu Yinquan, Director of the Chinese Social Democratic party, said, "We salute Falun Dafa, and send our loftiest respect to Master Li, the founder of Falun Gong. Master Li creates the truth that is correct across the world. If it spreads in China, China will become a democratic and freed country with peace, kindness and justice."

He said, "The CCP does not protect Falun Gong's beliefs, but brutally persecutes it. We demand that the CCP release all Falun Gong practitioners being imprisoned, all political prisoners and return governance to the people."

Dr. Huang Wangqing, Vice Editor-in-Chief of The Epoch Times, said, "Falun Gong practitioners' effort against the persecution is to save people. It is like the alto Yang Jiansheng sang in the song 'Compassion', 'I wish only that you may see the deception of that wicked entity. Compassion compels me to intervene. I can't bear to see you share in its fate. For the heavens have ordained the red dragon's end, I feel called to ensure your well-being.'"

Heaven's Destruction of the CCP is imminent. Chinese people are called to awaken

Dr. Gao Dawei, representative of the Global Service Center for Quitting CCP, said in his speech, "In China, many people print and distribute the Nine Commentaries on the Communist Party in many areas. Lawyers with conscience expose the CCP's persecution of Falun Gong and the unlawfulness of the CCP in punishing the distributors of the Nine Commentaries. Xie Tao, a high level CCP official and former Vice President of Chinese People's University, published an article to call for an end of CCP control. This would have been inconceivable one or two years ago. These facts indicate that the CCP is going to end and heaven's destruction of the CCP is imminent. Lies and violence cannot stop the CCP's disintegration."

Talking about spreading the Nine Commentaries and promoting withdrawals from the CCP and its affiliated organizations, he said, "We do not get involved in doing anything against the CCP's power and control, nor are we 'getting political' as the CCP charges. We focus on Chinese people who are poisoned and deceived by the CCP and will be implicated during the CCP's disintegration."