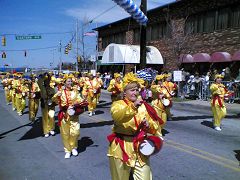 The Falun Dafa procession was well-received in its first appearance in the Greek community.

This was the first time Falun Gong practitioners were invited to participate in the parade. The Falun Gong procession was composed of a waist-drum troupe and a celestial maiden dance troupe dressed in traditional Chinese costumes.

The theme of the parade was "Spirit of America, Legacy of Greece, Freedom and Democracy for All." The organizers said they had invited other ethnic groups so that subsequent generations would live in peace and the whole world would know that the voices of freedom would not be suppressed again.

Floats depicting Greek legends dressed up the streets of Baltimore. Also in the parade were the marching band of a Navy school, bands in different ethnic costumes, dance troupes, and children. Heavy-duty trucks were at the end of the parade procession.

The Falun Dafa procession was well received by parade spectators. When the procession passed the stage, the host introduced Falun Dafa, and one could hear many complimentary remarks from the audience.