A large banner stating, "Support 20 Millions of People Quitting Chinese Communist Party," attracted many passersby on Pioneer Square in Portland, Oregon. The banner was part of a rally on March 24, 2007, supporting the 20 million brave Chinese people who have chosen to withdraw from the Chinese Communist Party (CCP) and its affiliated organizations. 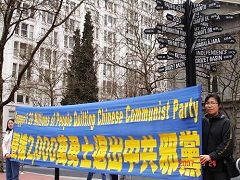 An event on Pioneer Square in Portland Oregon, to support the 20 million Chinese people who have quit the Chinese Communist Party and its affiliated organizations 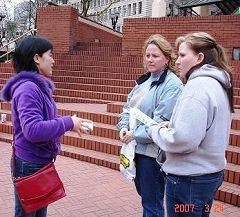 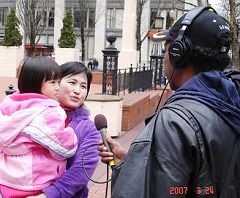 A reporter interviewing a participant at the rally

A speaker at the rally said that it was a righteous action, conforming to the will of heaven, that 20 million people have quit the Chinese Communist Party and its affiliated organizations. The rally also exposed the CCP crimes of harvesting organs from living Falun Gong practitioners. In its 50 years of rule, the CCP has killed about 80 million Chinese people. He said that in committing all of these evil deeds, the Chinese Communist Party chose its fate, to be eliminated by heaven. The rally also called on more Chinese people to wake up and withdraw from the CCP and its affiliated organizations.

Many passersby stopped to learn more details. Some praised the event and said they supported the rally. Others said that the rally was a good method to spread this information. Because there are so many immigrants in America, many people attending the rally will pass the information along to people in their home countries. A number of people showed their support by giving the thumbs-up sign.

A reporter from Community Radio told an interviewee, "You are brave. I respect your efforts. You are the hope of China. I will broadcast this news to thousands of people and let them share your joy."

“I Will Never Forget the Days with Teacher”