Munich, Germany: This is Our Obligation (Photos)

"It is our obligation to condemn these crimes (the Chinese Communist Party's (CCP) practice of organ harvesting from living Falun Gong practitioners)," said Mr. Saman from India. After seeing the photos exposing the CCP's crimes of harvesting organs from living Falun Gong practitioners, he signed his name on the petition form without any hesitation. He also told the reporter that people should not ignore these crimes, as the same thing could happen to them someday, and that it is everyone's obligation to condemn the CCP's crimes. 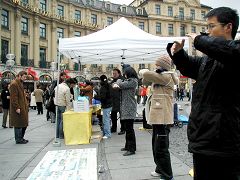 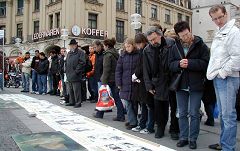 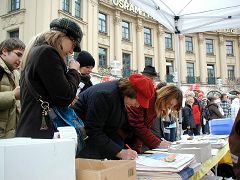 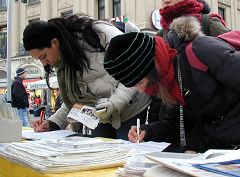 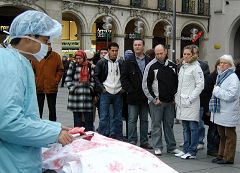 The Root of the CCP Specter has been Dug Out

On March 24, 2007, some Falun Gong practitioners from Munich and the region around it held an event in Karlsplatz Square in central Munich to support the 20 million Chinese who have withdrawn from the CCP and its affiliated organizations. This is also in response to the large-scale sequence of activities on the theme of "The root of the CCP evil specter has been dug out." This sequence of activities were organized by the Global Service Center for Quitting the CCP, The Epoch Times newspaper, Sound of Hope Radio, and New Tang Dynasty TV, and was supported by nearly 100 organizations worldwide.

Whether human beings believe or not, whether human beings are ready or not, God's punishment of the Chinese Communist Party is coming and the most stunning chapter in history will start. To break away from evil CCP specter is the only way that a person can be saved. In the last three months, the trend of withdrawing from the CCP has been rapidly proliferated and the end of the CCP is coming. The number of people withdrawing from the CCP is remarkably increasing daily. Since last December, the number of people making renouncements on the website of The Epoch Times each month is over one million, and the daily number has increased from 20-30 thousand to 30-40 thousand. The total has now exceeded 20 million. The CCP has come to its end and the time for God to eliminate the CCP is closer.

Humans Should Live Under God's Order

A lady from South Korea took a leaflet about the CCP's practice of organ harvesting from living Falun Gong practitioners, and she said that this leaflet should be delivered to the letter box of each household, to let all the people know about it. A man from Greece said he thought that it was such a horrible practice to sell people's organs. A woman from former Yugoslavia signed her name on the petition form and then wished good luck to the practitioners. A tailor from Vienna said that organs were parts of the body and should not be stolen. A clerk from a local pharmacy said it was against human conscience to steal other people's organs.

A Taiwanese living in Los Angeles, a man from The United Arab Emirates, a Chinese girl and many Germans also signed their names on the petition form.

A group of Austrian tourists told the reporter "We are against organ harvesting from living people. They (Falun Gong practitioners) should have their own way of living." Among them was a woman named Haide Barisch. She said that no one had the right to judge whether other people should live or not, and people should follow God's order and take things naturally when their span of life is finishing. People's organs belong to themselves, not others. She said it was immoral to take peoples' organs to prolong others' lives.