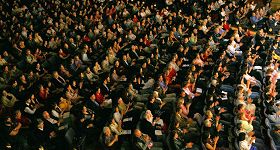 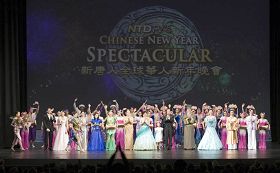 At the end of the third show

Ms. Lyn Allison, the Parliament Member and the leader of Australian Democrats, highly praised the shows. She said that the story of Falun Gong and the policeman (the dance "To the Rightful Place") was very touching, and the dance "Snowy Mountain, White Lotus" was beautiful and the costume design was also very pretty. 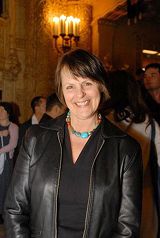 Ms. Allison said that the pretty costumes, elegant dance and beautiful singing brought the traditional Chinese culture to the audience. She said that Australians don't have many chances to enjoy such a good show, which makes the show very special. Ms. Allison hopes that more people, especially more Westerners, would come to appreciate the show.

Ms. Allison had a feeling that the show tried to pass an important message to people, although she doesn't know exactly what the message was.

Former Chinese Policeman and Immigrant from Beijing: The show is very touching.

Hao Fengjun, a former policeman from China, said that Ms. Yang Jiansheng's singing deeply touched him. He said, "I know that many Westerners like Ms. Yang's singing too. But if you never lived in China, you would not appreciate the profound content of the songs. I knew the situation of Falun Gong practitioners in China, and I knew that "many of them never returned." Falun Gong practitioners have given too much, and Tiananmen Square has also witnessed too many touching stories."

Ms. Wang and her family immigrated to Melbourne eight years ago. She said, "We were shocked that facing the brutal persecution, Falun Gong practitioners still keep clarifying the truth to people, and brought us such a wonderful show. They are truly great."

Qi Xin, a Chinese student, said, "I can tell that the members of the Divine Performing Arts Troupe cooperate with each other very well. They have expended very much effort for the show. I was also amazed that Falun Gong practitioners are so talented."

Ms. Qi Jiazhen, the author of God of Freedom's Tear, said, "The performances of the Divine Performing Arts Troupe, including the stage design, and costumes, are very professional, which manifest their ability and solid belief. I was very touched."

Mr. Peter Arthur, the manager of Kingpin Products, and his wife Ms. Avril Arthur said that the show was amazing. They said that the singers were very talented and that the Spectacular was really a spectacular. 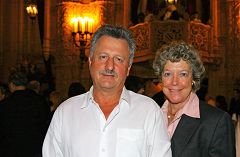 Ms. Arthur said that the dances were fabulous and the costumes were very pretty. She did not expect that the show would bring the audience to the level of cultivators in Buddhism and Taoism. She said that the content of the programs was very profound and the performers were not manifesting themselves, but cooperated with each other to manifest the content of the program. Mr. and Ms. Arthur asked if the show would be held in Melbourne next year. If yes, they said that they would definitely come again.

Leilana, a tourist from New Zealand, said that her grandmother Sandra is an artist. She came from New Zealand to visit her grandmother Sandra, and Sandra took her to the show. She felt that every program was interesting and special. She was amazed by the stage design of the first program--"Creation." Sandra said the Mongolian dance gave her very deep impression and she also likes the story about Yue Fei. She said that she would take another granddaughter to the show next year. 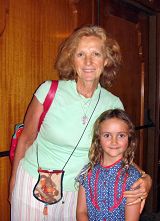 64-year old Mr. Ruan is from Vietnam. He came to the show with his wife. He said that his ancestors were from China, so he believes that he has pre-destined relationship with China. The Chinese culture reached its peak in Tang dynasty, and the show manifested the art in Tang dynasty style. He used words "beautiful" and "outstanding" to describe the show. He said that several friends also wanted to come, but did not get tickets. He said that he would tell his friends how wonderful the show was.

The Show has Brought a New Understanding of Chinese Culture

The Show Deeply Touched the Audience

Many audience members were touched by the Falun Gong practitioners' spirits, which was manifested in the show.

Ms. Lin Ruifen, a Vietnamese Chinese, said that she cried when Jiang Min was singing "Why Refuse." She could not hold back her tears during the entire show. She said that she was melted into the show and was deeply touched by it. Mr. Jia Liwen and other Westerners had the same feeling. The show has told people many things and made people think of many things. Actually, many in the audience started looking for the truth of Falun Gong after watching the show.

The show also has some magic effects. Xiao Shan, a college student in Melbourne, told reporter that she had severe pain in her throat before the show, and she could not swallow water. However, she found that all the pain was gone after the show. Mr. Colin Miller, who just had surgery to remove a cancer tumor on his back the day before the show, came to watch it on March 23. After the show, he didn't have to take the painkiller medicine, and had a very sound sleep that night. He felt lucky that he watched the show and believed that all the audience members at the show were lucky. 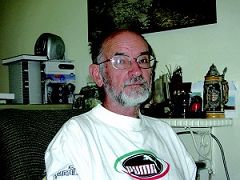 Mr. Miller, who just had a surgery to remove the cancer tumor on his back the day before the show, felt great after watching the show.

No one can estimate how much this show has brought to people, but some audience members may feel the significance of the show in their daily lives.