(Clearwisdom.net) On March 24, 2007, people from all walks of life held grand activities on Union Square downtown and on Garden Corner square in Chinatown to support twenty million people quitting the CCP and its affiliated organizations. The participants said, "The evil Chinese Communist Party has been uprooted. Heaven will destroy the CCP." They called on Chinese people to quit the CCP for a safe future. 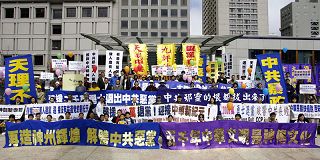 The rally was held at 11:00 a.m. on Union Square in downtown. At 12:30 p.m., the rally participants marched along main streets of San Francisco to Garden Corner square in Chinatown. A rally in Chinese was then held. Since the publication of "Nine Commentaries on Communist Party" in 2004, the wave of quitting the CCP in China is catching the attention of western society.

Wang Feng, a senior manager at a high tech company in Silicon Valley said that culture is the spirit of an ethnic people. Chinese culture is composed of Confucianism, Buddhism, and Daoism, which brought prosperity to China in history. But in the past half century, Chinese culture was damaged by the CCP's destruction of religions and persecution of intellectuals. The 5000-year old Chinese culture has been ruined by the evil CCP.

She said in analogy, "A person without a soul is like a moving corpse. So is an ethnic group without a culture. It has no future. The 20 million Chinese quitting the CCP brings hope to China. Some Chinese people come abroad and think that the withdrawal has nothing to do with them. This is wrong. One should quit CCP from his own conscience. Chinese people have the responsibility to cast out Party culture and rebuild Chinese culture without the Party culture."

A Western Reporter Who Worked in China: CCP Suppresses Freedom of Press

Maria Daily, who worked for a Western magazine for four years in China, said she experienced the CCP's intensive blockage of news. After reading the Nine Commentaries, she understood a lot.

She said that the CCP fully controls the media in China and uses it as propaganda tool. Even western media in China are also controlled by the CCP. For example, the BBC is not allowed to broadcast in China after it reported the facts about the Cultural Revolution and former CCP leader Mao Zedong.

Maria said the CCP not only controls the press, but also personal freedom. She said that apartments for foreigners were monitored. She found that the lady in charge of cleaning lived there 24 hours a day and also took care of security. The lady could check any visitor's identity.

She said that many people are deceived by the CCP's lies. Chinese people live in such an environment and it's hard to escape from the situation. After reading the Nine Commentaries, she said she understood the CCP's tricks.

Steve: It is Wrong to Ignore CCP's Crimes

Steve Ispas is from Romania. His grandfather was imprisoned for 22 years for protesting the communist regime there.

Steve said it is inconceivable that the CCP commits countless crimes infringing on human rights, but governments and companies in Western countries are only interested in the so-called Chinese economic development. He called on people not to be fooled by the CCP's superficial economy development. It is risky to invest in China. When the CCP commits serious crimes, it is wrong to work with the CCP and ignore those crimes. All communist countries in the world are in their final days. The current President of Romania has condemned the communist party as an illegal criminal organization.

Computer engineer Eric Huang said that after reading the Nine Commentaries, he understood the CCP's nature. He emphasized that the CCP destroys Chinese culture. To ruin Chinese culture, the CCP destroys the Chinese people's family traditions and morality by undermining children's respect for their parents. The CCP infuse in children that the CCP is their parents. In the Cultural Revolution, children were instigated to attack their parents, criticize their teachers, and only express loyalty to the party.

Eric said when the Chinese people do not believe in communism, it deceives people with patriotism and material goods. The CCP doles out a small portion of wealth to the public, but embezzles all the Chinese people's property.

He summarized that for many years, the CCP has changed its superficial behavior from one stage to the next, but its nature has never changed.

Former Chinese Professor: China's Economic Development Is not Due to the CCP's Rule but the People

Mr. Yu Xinbai, former professor in China and now a resident of San Francisco, said that he came with several of his friends to express his view. He said, "The CCP is a regime that never admits mistakes. It uses many excuses to deceive the Chinese people. For example, the conferences of the 'National People's Congress' and 'The Chinese People's Political Consultative Conference' do not solve any concrete problems. The representatives do not have their own views, but expresses loyal words to the party."

He said, "Chinese intellectuals are fearful, especially after the 'Strike Down Right-wingers' movement. They don't have any different opinions from the CCP. In addition, those who follow the CCP can get benefits, such as a house and position. Nobody stands up for the people. It is China's sorrow. Currently in China, the media is praising the CCP's economic achievement, but it is the people's achievement."

Representative of Northern California Service Center for Quitting CCP: We Hope Chinese People Get Rid of the CCP

Ma Youzhi, a representative of the Northern California Service Center for Quitting the CCP, said that twenty million Chinese have recognized CCP's true nature and quit it. Quitting the CCP has become the most important thing for Chinese people. Every month more than one million people quit the CCP. The CCP has been uprooted."

He pointed out, "In China, morality is degrading; good and bad are reversed; evil people control the country; and no justice exists. This is a manifestation of the CCP's final days and the Chinese people's desperation. The CCP is ruining the Chinese people along with its own destruction."

The spectacular scene on Union Square caught the attention of Western passers-by. In looking at the banner, some of them asked for more details. Upon learning that twenty million people quit the CCP, they were happy.

One man who came to see a doctor in Chinatown and passed by Garden Corner square, said that such news cannot be found in the mainstream media because business and political circles are controlled by moneyï¿½"and it's a sad situation.

Another man who passed by Union Square, when realizing that the rally was for celebrating twenty million withdrawals from the CCP, said that many times he had heard reports about Stalin's killing but not Mao Zedong's killingï¿½"and Mao killed even more people. Chinese people must quit the CCP if they want to join the international community.

Many people gave speeches that day, including Ms. Wu who just came to US from China, Mr. Guan from Indonesia, and Lan Shu, a renowned reviewer at the Sound of Hope International Broadcasting Station. Ms Wu narrated her own experience of illegal imprisonment and torture by the CCP for distributing truth-clarification materials of Falun Gong in China. Mr Guan expressed the wish that Chinese people will revive traditional culture and have a good future.