Canberra, Australia: A Performance That Uplifts People's Hearts and Minds

(Clearwisdom.net) On March 21, 2007, the Divine Performing Arts Troupe presented the second performance of the 2007 Chinese New Year Spectacular in Canberra, the capital of Australia. This performance of traditional Chinese dance and music attracted many government officers and the media, who highly praised the show. The Spectacular was supported by many Parliament Members, businesses, and the media. More than 10 media outlets reported about the Spectacular. 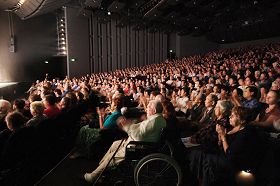 The Hon Philip Ruddock MP, Attorney General, attended the Spectacular. During the intermission, he told the reporter that the performances were fabulous. The Tang Dynasty style dancing and the stage designs brought the beauty of Chinese arts to the audience. He told the reporter that the audience members are from different cultures, and said that people should learn about different cultures, as otherwise our vision would be very narrow.

Mr. Zed Seselja, a Member of Parliament, said that the performances were very rich, and he was very glad to watch them. He said that the beauty of the Tang Dynasty would touch everybody's heart. He wished the Spectacular a big success.

Ms. Jacqui Burke, Member of Parliament, said that she came here to support Divine Performing Arts. She appreciates the Chinese culture very much, and she expected to enjoy the traditional Chinese art during the show. She told the reporter that the show was very beautiful and deeply touched her.


Feedback from the media

Ms. Belinda Barancewicz, the director and producer from Southern Cross Ten TV station, said that she liked the sopranos' singing, which was wonderful and transported her to another world. From the songs, she felt purity and brightness, which was a new feeling for her, and it opened her mind. The beautiful costumes and the stage design also made a very deep impression on her.


Southern Cross Ten TV station, 2CA Radio Station and several newspapers sponsored the Spectacular. Mr. Peter Starun from 2CA Radio Station said that the show was worth their sponsorship because it included such a rich culture, which is very exciting for Canberra.

Mr. Chou Chin-Fa, the director of Taiwan Commerce Office in Canberra, and his wife said that they enjoyed every performance on the program. They said that all the performances have deep content and made a deep impact. The divine culture was fully demonstrated by the very skillful performances. They said that the show was very professional and manifested the most righteous and beautiful side of traditional Chinese culture. They said that it is one of the top shows in the world.

Mr. Su and his family watched the show. He praised the show highly. He said: "Yue Fei's spirit encouraged many Chinese people. He is our national hero. However, few young Chinese people know about him. So, it is very good that the Spectacular spreads Chinese history and promotes the Chinese culture."


The performances by the Divine Performing Arts Troupe not only brought beauty, happiness and brightness to the audience, but also helped to improve people's spirit.

The Spectacular originally planned to have only one show in Canberra. It became obvious that one show would not be enough, so the organizers decided to hold two. Divine Performing Arts will perform next in Melbourne and Sydney.