On March 19, 2007, reporter Helen Musa previewed a "divine tale" of legendary heroes in the classic battle between good and evil. This was her article. 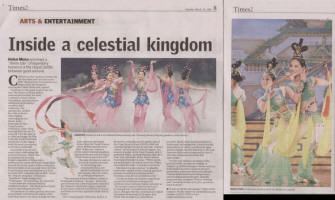 Coming to the Canberra Theatre for the first time and very late in our 2007 Chinese New Year season is a larger-than-life theatrical spectacular called Myths and Legends. You'll have to be quick to get in for this one. The show on Wednesday is sold out and recently the host, Canberra's Asian Culture Association, announced an additional performance would be held tomorrow. The spectacular, backed by a full orchestra, with original choreography and music, is the brainchild of New Tang Dynasty Television, a New York-based global Chinese TV network. First dreamt up in 2004 and staged in New York, this is the third such production to be staged, with this year's tour going to 30 cities worldwide.

Essentially a dance and music show celebrating 5000 years of Chinese culture, this is certainly not from the People's Republic of China but is performed by artists of Chinese origin from around the world, many of them trained in Western ballet. In an unusual twist, the New York Tang Dynasty is promoting this as a show not only with "exquisite and soulful" music, the "beauty and grace" of dancers, "grandiose" stage designs and "exuberance" in costuming, but intended "to elucidate the concepts behind traditional cultureï¿½"the admiration of gods and the upholding of morality".

The promoter is rather general about the actual ethnic and historical origins of the individual dances on show, though the sets and costumes are largely drawn from the Tang Dynasty about AD600 and that more than 50 dancers weave "a divine tale of celestial kingdoms, legendary heroes and the classic battle between good and evil." Because the show is seen as a kind of morality tale with an underlying anti-Communist focus, the global coordinator for the spectacular, Zhou Yu, hints at the political perspective. "The meaning behind Chinese culture is broad and profound," he says, "but in the past 50 years this culture has been ruined by the Chinese Communist regime. Material desires have surfaced everywhere in society and there is no more spiritual culture left in China."

New Tang Dynasty Television, in fact, is devoted to conjuring up the golden age of the Tang Dynasty from AD618 to 906, and costume designer Amy Lee said the "totemic color" of the present Chinese regime, red, was not popular in the Tang Dynasty which preferred yellow, symbolizing she adds, freedom. Vice-president of the Asian Culture Association Songfa Liu says, "When you listen to the music, it stays in your ears. When you watch the show, it touches your heart."

The concert is also seen as "a valuable cross-over cultural event, a strong, gracious gesture towards international understanding in an all-too-troubled world."

It features artists of Chinese origin from around the world and is designed to celebrate what overseas Chinese perceive as "the ancient culture of the Divine land," focusing firmly on traditional Chinese dance, though with contemporary digital animation technology by designer Ken Chieh Hsu to make it as colorful as possible. Much of the instrumentation is traditional, including erhu, a kind of violin, and guzhen, or zither, as well as pipa, (biwa in Japan), the lute featured in The Last Emperor with music composed by Lisa Li, who also composed music for this spectacular.

For the non-Chinese members of the general public, the show is unlikely to conjure up political images. On the contrary, if the production lives up its advance promotion, audiences will see traditional Chinese instruments and compositions, ancient dress and landscapes, digitally mastered sets, energetic Chinese dancing and a "heavenly theme of loyalty, goodness [and] honesty."