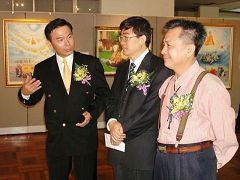 More than 40 artworks, which were created by several oversea Chinese artists, were exhibited. The artworks express the artists' pursuit of truth and respect to deities. They also demonstrate the fight between deities and demons.

Mr. Yang Minhsiung, the representative from the Falun Dafa Association in Tainan, said that the purpose of the art exhibition was to call for voices of justice and help to stop the persecution. Falun Gong practitioners also hope that people will recognize the evil nature of the Chinese Communist Party (CCP) through the artworks.

The deputy mayor, Hong Cheng-chung, praised the way of clarifying the truth through the artworks. He said that everyone knows what fairness is, and as long as we fight for the truth, the truth will stay with us.

City Parliament member Mr. Cai Wang-chuan said that he hoped that everyone in Tainan would come to the art exhibition and learn about the principles of “Truthfulness-Compassion-Forbearance,” which help to improve one's spiritual level.

Dr. Wang Bao-hsing, who has a very deep understanding of the CCP, said that through the artworks he can sense Falun Gong practitioners' appreciation of their Master, Mr. Li Hongzhi. He also learned the brutality of the persecution. He stated that the media in Taiwan is afraid of the CCP, which is a pity. He hoped that the artworks would be exhibited everywhere in the world and help people to recognize the evil nature of the CCP.

Professor Chan Shi-huang from Cheng Kung University praised Falun Dafa. He said that his wife became healthier and nicer after she practiced Falun Dafa, and she is busy but happy every day. He hopes that people can sense the beauty of Falun Dafa through the artworks.

Mr. Yan Hongming, the principal of Nanning High School, said that the artworks were excellent, and they are helpful in improving students' moral standards.

Businessman Mr. Chen Jinfu was shocked by the persecution manifested by the artworks. He knew about the persecution, but he didn't know that it was so brutal. He said that people should learn about the evil nature of the CCP.

Ms. Chen Mei-fang, an art teacher from Hou Bi High School, explained the content of the artworks for the visitors. The organizers said that the exhibition will last until March 28, and that they hoped more people would come to it.

“People Around the World Protest the Persecution of Falun Gong”

“Denmark: People in Aarhus Against Sister-Relationship with Harbin (Photos)”