Russia: Clarifying the Truth in the Republic of Kareliya (Photos)

(Clearwisdom.net) On March 10, 2007, Falun Gong practitioners from the Republic of Kareliya, the Russian Federation, came to the capital city of Petrozavodsk to hold an activity to introduce Falun Dafa as well as expose the brutal persecution of Falun Dafa in China. The information delivered by practitioners received the local people’s concern. 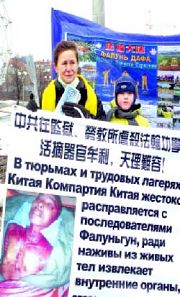 Falun Gong practitioners protest in Petrozavodsk against the CCP’s atrocities

A local newspaper in Kareliya, Arguments and Facts, reported this Dafa promotion and truth-clarifying activity. The report introduced Falun Gong, a cultivation exercise rooted in China from ancient times. The reporter also interviewed local Falun Gong practitioners and reported about the persecution happening in China.

Practitioners told the reporter that Falun Dafa is a righteous cultivation practice, based on the principle of the universe, “Truthfulness-Compassion-Forbearance.” It received commendations and was promoted by the Chinese government soon after it was introduced to public. However, due to the then-Chinese dictator’s selfishness and envy, a nationwide brutal suppression against Falun Gong was launched in China. The suppression has lasted for over seven years, during which, hundreds of thousands of practitioners have been imprisoned and several thousand practitioners have died as a result of the persecution. Moreover, according to an independent investigation conducted by international organizations, it has been confirmed that the CCP conducts organ harvesting from living Falun Gong practitioners for profit. The CCP’s actions are extremely evil and inhumane. A book, the “Nine Commentaries on the Communist Party” was published in 2004. This book thoroughly exposes the CCP’s evil nature. Chinese people who learned the truth by reading this book have quit the CCP and its related organizations. The collapse of the CCP is approaching. Out of a sense justice and conscience, Falun Gong practitioners are exposing the facts about the persecution to the public, appealing for the world's people to lend a hand to stop the CCP’s barbaric actions. The world needs “Truthfulness-Compassion-Forbearance.” Only if the principle of “Truthfulness-Compassion-Forbearance” is followed, can we have a truly peaceful world.