(Clearwisdom.net) Upon entering the glass doors of the Saxon Federal State Parliament building, what comes immediately into view is a huge portrait of a Buddha with a compassionate smile. This artwork was painted by Professor Zhang Kunlun, a Falun Gong practitioner in Canada. It is one of the works displayed at the “Truthfulness, Compassion, Forbearance” Art Exhibition held at the Saxon Federal State Parliament in the State Capital of Dresden from March 7 to April 26, 2007. Shining with glorious sun rays reflected from glass walls, forty works are displayed on the two sides of a glass hallway. 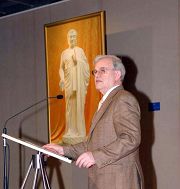 In his opening remarks at the inauguration ceremony, the President of Saxony’s State Parliament, Mr. Ernst Iltgen, said that there is a special significance to the exhibition

Supported by Saxony’s President of the State Parliament, Mr. Ernst Iltgen, and organized by Germany’s Ars Honesta Art and Human Rights Association (Verein Ars Honesta Deutscher fuer Kunst und Menschenrechte e.V.), the inauguration ceremony was held on March 6, 2007, at 6:00 p.m. Many distinguished guests were invited to the ceremony. In addition to graceful music, members of the German Art Association also sang the “Song of Joy” together at the inauguration ceremony.

In his opening remarks at the inauguration ceremony, Saxony’s President of the State Parliament, Mr. Ernst Iltgen, said that there is a special significance to the exhibition. He said that at a time when the economic relationship between Germany and China is booming, an art exhibition exposing the human rights situation in China and the Chinese Communist regime’s cruel persecution of Falun Gong practitioners is of special concern to the people.

He added, “The values based on the principles of Truthfulness, Compassion, Forbearance are by all means different from the thought system of an autocratic regime and totalitarianism. That is what German and other European people have confirmed since the twentieth century. With compassion, people are able to confidently and freely experience and express the personal freedom endowed by the creator since they were born.”

The next speaker was Mr. Volker Dietz, chairman of Ars Honesta Human Rights Association. He also introduced the works on display to the visitors. The themes of the artworks were: Assimilation to Falun Gong, Returning to One's True Self, Witness to Life, Long Live Righteous Belief, Spreading the Truth, Awakening to Justice and Retribution for Evil. Mr. Volker Dietz accompanied visitors to view the exhibition and explained the profound meanings behind each artwork in detail to them.

After visiting the art exhibition, Saxony’s Vice President of the State Parliament, Ms. Regina Schulz, said that she was shocked to learn about the horrendous persecution that Falun Gong practitioners have suffered in China. She said, “I must seriously differentiate the artistic elements from the meaning of the works as these paintings are so exquisite and magnificent, but the meanings behind them make my heart so heavy. I don’t know which one I like most because every painting emanates a golden glow, but I feel very sad. So after seeing all the works, I feel that my soul is deeply moved.”

When asked if she had an understanding of the situation in China previously, Ms. Schulz said, “This art exhibition is the first time for me to be really shocked by China’s current situation, since I didn’t believe it was so serious in the past. This art exhibition has given me some inspiration. I really appreciate that. I know many people have been to China for sight-seeing. As they are infatuated with the beauty of its scenery and the loveliness of its people, they may not pay attention to the problems above mentioned. In the meantime, people are unable to get enough insight into the situation in China from the local media. As a result, undoubtedly it is very important for people here to exchange or get information through ways like this. I think we should, first of all, figure out what is going on there and then come up with ideas on how to stop it, how to record it and how to make it known to the public. Perhaps this is an occasion for people to get to know the situation in China better. That being the case, this art exhibition has become essential today."

Every day there are groups, including students, visiting the State Parliament through the civil hall. When passing through the exhibition, many people would stop to find out more about the Chinese communist regime’s persecution of Falun Gong.

The exhibition will run at the Saxon Federal State Parliament for seven weeks.