On March 3-11, 2007, at the Chiayi County Government sponsored Lantern Festival, Falun Gong practitioners displayed the "Truthfulness-Compassion-Forbearance" Art Exhibition, which was welcomed by the citizens. One art teacher from a high school said, "Those artworks were created by people who enlightened to the principles of the universe. I can feel the persistent and pure spiritual power in them." 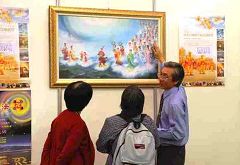 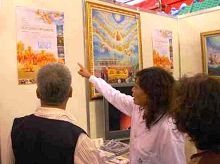 Hundreds of thousands of people from all over Taiwan came to the festival every day. Falun Gong practitioners arranged the art exhibition, which also provided an opportunity to promote two other exhibitions in Tainan and Chiayi on March 14-28 and April 11-29 respectively.

More than 40 artworks were displayed at the exhibition. These pieces have been shown in more than 30 countries, and won many awards from governments and non-government organizations.

The artworks were created by Falun Gong practitioners, including Zhang Kunlun, Zhang Cuiying, Li Yuan, Chen Xiaoping, and Dong Xiqiang. These artists improve their bodies and spirits through cultivating Falun Dafa and enlightening to the Law of the universe. They follow the principle of "Truthfulness-Compassion-Forbearance," and share their experiences and understanding through their art.

Several girls were attracted to the painting "Rotate the Big Falun." A practitioner told them, "Mr. Li Hongzhi, the founder of Falun Dafa, rotated many Falun at a Falun Gong conference. The Falun purified the bodies of more than 5000 practitioners at the conference. Some practitioners whose celestial eyes were open saw that Master Li radiated a flow of red energy, which covered the whole conference hall."

Falun Gong practitioners said that people not only see the beauty of Falun Dafa through the artworks, but also learn how practitioners have clarified the truth consistently during the severe persecution. They hope that more and more people will come to the art exhibitions.

“The Joy of Returning to Dafa”