Detroit, Michigan: Golden Lotus Amidst a Sea of Green (Photos)

(Clearwisdom.net) March 11 was the warmest day of the winter in Detroit, Michigan. Snow from days past had melted and spring seemed to return. Falun Gong practitioners in Michigan participated in the 49th march for the Saint Patrick's Day celebration of the local Irish community. 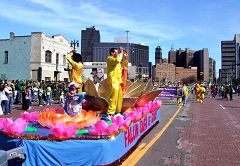 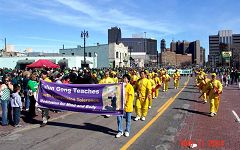 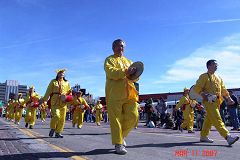 Michigan Avenue was crowded with people wearing and carrying green. They seemed to burst out into the streets to embrace the spring after being confined indoors for several months. Falun Gong practitioners wore golden exercise costumes which looked particularly bright and shiny in the brilliant sunshine. The float decorated with all kinds of lotus flowers was also especially beautiful. It was like a golden lotus amid the sea of green. Along with the the music of "Falun Dafa is Great," the waist drummers' performance won applause from spectators along the way.

When the Falun Gong contingent passed by the review stand, the host repeated three times, "Falun Dafa, Truthfulness-Compassion-Forbearance is good," and repeatedly extended their thanks to the Falun Gong contingent for bringing "Truthfulness-Compassion-Forbearance" to the Irish community. On the way back to the starting place, many people asked practitioners to have pictures taken with them, and told practitioners that they have received the fliers introducing Falun Dafa and the persecution.