On February 22, 2007, Ms. Zhang Cuiying, a renowned artist of traditional Chinese paintings from Sydney, held a press conference in front of the Supreme Court and urged the public to pay attention to the upcoming hearing in the Supreme Court of New South Wales in a lawsuit against the former Chinese dictator, Jiang Zemin, for genocide, torture, and crimes against humanity. She urged the Australia justice system to resist interference from the Chinese Communist regime and to require the court to extend the time for a summons to be served for another six months. In addition, she urged the Department of Foreign Affairs and Trade to deliver the summons to the defendants in accordance with the commands of the court. 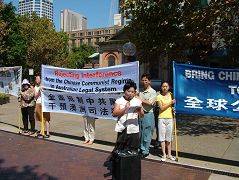 (The press conference in front of the Sydney Supreme Court)

Representatives of the Falun Dafa Association of New South Wales; the Coalition to Investigate the Persecution of Falun Gong(CIPFG), Australia Branch; the World Organization to Investigate the Persecution of Falun Gong(WOIPFG); and Dr. Wang Lian, who just fled to Australia from Hong Kong, all made comments to support Ms. Zhang.

Ms. Zhang Cuiying read from an open letter in which she announced that she had filed a lawsuit against the former Chinese dictator, Jiang Zemin, and the 610 Office for genocide and torture on September 15, 2004. However, the summons has not been served to the defendants for over one year due to interference from the Chinese Communist regime.

The plaintiff delivered the summons to the defendants by a substitute method and got a receipt, but the New South Wales Supreme Court judge ruled that Jiang Zemin was covered by "Head of State Immunity." Thus the summons should be served by a diplomatic channel rather than the substitute method. Accordingly, the Supreme Court sent the summons to the Ministry of Law through which the Department of Foreign Affairs and Trade was required to deliver the summons to the defendants by a diplomatic channel. However, the Federal government did not cooperate with the court, and instead they deliberately tried to delay the application of the court order, which led to the expiration of the summons. So in February 2006, the plaintiff asked the court to extend the time for the summons to be served for a reasonable period. Only after one year--on February 26, 2007--did the court decide to hold a hearing on the requirement .

Ms. Zhang noted that, based on 21 files obained through the Free Legal Information Act, the Department of Foreign Affairs and Trade has contacted the Chinese regime eight times since 2003. Although most of the contents of the files have been deleted, it is still clear that the Australia government made use of every possible measure in the legal system to make sure that this case would not be a "problem" in its relationship with China, and assured the Chinese government that they would take care of their "concerns". This information confirmed the reliability of the allegation by Mr. Chen Yonglin and The Australian that the Department of Foreign Affair and Trade offered legal advice and help to the Chinese government regarding this lawsuit. She urged the public to resist the interference by the Chinese Communist regime and to uphold the independence of the Australian justice system.

Mr. John Deller, director of the Falun Dafa Association of New South Wales, added that The Australian has reported that Chinese Ambassador Ms. Fu Ying went to the Department of Foreign Affairs and Trade in Canberra several times to pressure the Australian Government with economic and diplomatic issues to dismiss the case. Former Chinese diplomat Mr. Chen Yonglin also disclosed that the Department of Foreign Affairs and Trade privately provided legal advice and help to the Chinese regime.

Mr. Deller also noted that the progress of this lawsuit is a direct test for the Australian government and legal system as to whether or not it will protect the human rights of its citizens in the face of economic pressure. "It is dangerous for everyone and every nation to keep silent about evil," he said

In a phone interview, Ms. Chu Wanchi, the chief of the Human Rights Law Foundation, Asian Branch, said that from 2002 to 2007, Falun Gong practitioners filed criminal or civil lawsuits in over 15 countries against former Chinese dictator Jiang Zemin, which caused a great stir in the world. The criminal accusations include inhuman torture and genocide, which is regarded as the most notorious human rights infringement since World War II. These lawsuits clearly prove the existence of the persecution of Falun Gong in China. They also reveal the brutality and severity of the persecution. So far, over 70 attorneys from more than 30 countries have been involved in the lawsuits against Jiang Zemin. She thought that the most significant aspect of the lawsuits is that they serve as a wake up call and constant reminder to the international community to recognize the human rights infringements behind the economic benefits when trading with the Chinese Communist regime. This infringement not only affects the human rights, lives, liberty, and property of the Chinese people, it also endangers the safety of the international community.

She said, "We hope the international lawsuits will serve as a reminder to the international community that the so-called 'Immunity' or 'Immunity protection' should not be extended to Jiang Zemin or to those who were exploited by Jiang to persecute Falun Gong practitioners regardless of loopholes in the legal system or ignorance of human rights infringement by the international community. The victims should be treated fairly and with appropriate legal assistance." She hopes the Australian legal system, with hundreds of years of tradition, will uphold justice and make an objective and fair judgment in this case.

Mr. John Fuai, the former chairman of the Australian Christian Kyros Organization, said in an address at the press conference that organ harvesting from Falun Gong practitioners is an appalling evil. He also said he supported and encouraged Falun Gong practitioners to defend their beliefs and bring the persecutors to justice. Senator Chris Bowen also sent his letter of support letter to the press conference.

WOIPFG notes that the lawsuit itself is not only an individual action to pursue justice, but also a start to disclose and sentence the most brutal crimes of human rights infringement in history. WOIPFG expressed its support of Ms. Zhang's legal action and urged everyone, every government, and officials in legal systems everywhere to speak out and uphold justice.

“A Pure and Shining Young Heart”

“My Journey Back to My Hometown to Clarify the Truth”