(Clearwisdom.net) On February 27th and 28th, 2007, invited by the Human Rights Committee of the Irish Parliament, David Matas visited Ireland. Mr. Matas is an international human rights lawyer in Canada, one of the authors of "Bloody Harvest - a Report into Allegations of Organ Harvesting from Falun Gong Practitioners in China." Mr. Matas held news briefings, met officials from the Ministry of Foreign Affairs, held a hearing at the Human Rights Committee of the Irish Parliament and made a public speech at well known Trinity College. New evidence of organ harvesting atrocities disclosed in the report aroused great attention from all circles in Ireland.

On the afternoon of February 27th, Mr. David Matas held a news briefing at Trinity College, introduced the latest report and answered questions by reporters. Senator David Norris made a speech. Zhao Ming and Dai Dongxue, Falun Gong practitioners told about how they themselves and their family members were persecuted by the CCP because of their practicing Falun Gong.

At the news briefing, Mr. Matas said that his visit was a followup to a visit by David Kilgour, co-author of the report, who visited Ireland last November. He said that after publishing the report on July 6th 2006, the two investigators visited over thirty countries in the following six months and interviewed those who had their organs transplanted in many countries. They have now obtained new evidence and counter evidence. Mr. Matas said, "This new evidence has reinforced their conclusion: The crime of removing organs from live Falun Gong practitioners for sale does exist in China. The military in China have extensively participated in it and tried to gain sudden huge profits from it. The report calls on all governments to discourage their people from going to China and having their organs transplanted, forbid rejection medicine for transplant from going to China and suggests that international communities should press the CCP to stop its atrocity by making use of the Olympic Games."

He continued, "The new report has added much more recording of the evidence of investigators telephoning hospitals in China and publicized statistics. M, the investigator phoned doctors specialized in organ transplant in over eighty hospitals in all over China. Doctors in ten hospitals admitted using organs from live Falun Gong practitioners; five hospitals claimed they could obtain organs of Falun Gong practitioners; fourteen hospitals admitted the organ providers were prisoners and ten hospitals said that the organ resources were state secrets which could not be revealed on the phone."

He gave an example: "The investigator phoned hospitals in China asking if they had organs, prices, how long it would take to get a one and organ resources. The reply he got was, "Yes, it takes two weeks for you to obtain the right organ. The organ is from a person who practices Falun Gong and he is healthy.'"

Mr. Matas added, "They interviewed Falun Gong practitioners in many countries in the world who used to be locked up in China. The conclusion was that all of them had ever been physically checked, their blood taken and organs checked systematically. Yet some other prisoners do not have such physical checks. Several Falun Gong practitioners were set free when they were told that their organs were not healthy.

"A new finding in the latest report is that the army in China has been involved in removing organs from live people. Many surgical operations are done by military surgeons."

Mr. Matas went on, "Although Ireland is a small country, together with the European Union, she can forbid her people from going to China and receiving organs transplant. We can not just come to conclusions and look on, we must restrain the atrocity."

Senator David Norris also participated in the news briefing. He said, "It is too cruel, too inhuman that a group of people believing in "Truthfulness, Compassion and Tolerance" whose organ are being removed when they are still alive, which can never be tolerated in this world. We must immediately stop the atrocity. He added, Jan Otto, MP, his colleague, gave his regards to Mr. Matas and Mr. Kilgour, and wished the visit of Mr. Matas a success!" 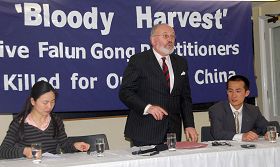 On the afternoon of 27th February, Mr. Matas met officials of the Ministry of Foreign Affairs. On the morning of 28th February, Mr. Matas held a hearing at the Human Rights Committee of the Irish Parliament telling about the investigation, the new evidence and the report. He put forward his suggestion to the Parliament and answered questions by members of the Parliament. Members of the Committee had a discussion of how to investigate into and how to stop the CCP's atrocity and raised suggestions such as, by legislating, checking those people going to China for organ transplant, checking organ transplant medication exports to China and making investigations into those who have already had their organs transplanted in China but they do not know where these organs resources are.

Pat Carey, MP, advised that the government could take measures influencing medical experts and other enterprises. Catherine Murphy, MP, suggested that Parliament should interview those who have been to China and had organ transplants which should be a part of the investigation. Paul Braford, chairman of the Human Rights Committee, said: Considering the seriousness of the motion, the Human Rights Committee will try their utmost to investigate into it and stop the atrocities. We will bring forward a report to the government to be elected and give a quick reply. At the same time, we will raise the question of the Olympic Games to be held in Beijing in 2008. 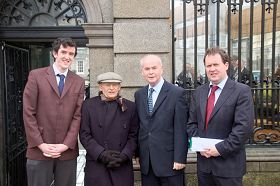 On the evening of 28th February, Mr. Matas spoke to an audience at Trinity College. People from all circles were in attendance. Many people asked questions expressing great concern over the situation.