(Clearwisdom.net) Canadian renowned human rights lawyer David Matas was invited by the Ethical Society of Philadelphia and The Ethical Action Committee to make a featured speech at a forum held at 2:00 p.m. on March 11, 2007 at the auditorium of the society. The theme of the forum was "Organ Harvesting & Human Rights Violations in China." The forum was hosted by leader of the ethical society Richard Kiniry. Other speakers also included Mr. Zhang Erping, Executive Director of the Association for Asian Research in New York City, representative of the Doctors Against Organ Harvesting (DAOH) Dr. Torsten Trey, Dr. John Haas, President of the National Catholic Bioethics Center. 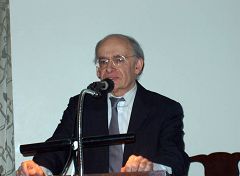 David Matas makes a speech at Ethical Society of Philadelphia 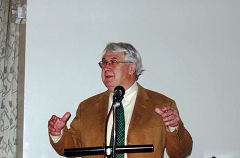 Richard Kiniry, leader of the Ethical Society of Philadelphia makes an opening speech 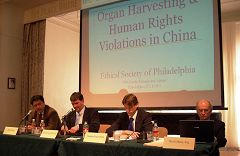 Matas first addressed the audience the background of his participation in this matter. Since the Epoch Times revealed the atrocities, and after listening to the testimony of a military doctor's ex-wife and suspected arguments on this matter, Matas and David Kilgour decided to take over the investigation. At the beginning of their investigation, they actually wanted to verify that the alleged crimes against Falun Gong practitioners are untrue.

Matas stressed that the basic approach for such kind of investigation usually requires two independent witnesses to make the same judgment over the same thing. But it was impossible to do so with live organ harvesting, because the victims have their organs removed and are thereby murdered, their bodies are cremated, and they are therefore unable to testify. Doctors involved are obviously not willing to testify. Therefore, they adopted over a dozen approaches of "proof" and "disproof," to investigate this matter. Just as pointed out in the investigative report by Matas and Kilgour, all "proof" approaches revealed more profound and more direct evidence that support the allegations, and all "disproof" approaches could not provide convincing rebuttal evidence. Moreover, they made a comprehensive analysis of evidence, such as health care costs, the CCP's policy of persecuting Falun Gong, military involvement, the history of executed prisoners having their organs harvested, how 2,000 executed prisoners sentenced to death each year provides 10,000 organ transplants, why patients wait for organs in other countries, but in China organs wait for patients, forced blood tests for arrested Falun Gong practitioners, and recorded telephone conversations with hospitals in China, and so on, Matas and Kilgour concluded that the allegations of live organ harvesting are true.

Executive Director of the Association of Asian Research in New York City gave a brief account of basic information about Falun Gong and the CCP's nearly eight-year continued persecution. Dr. Torsten Trey, representative of Doctors Against Organ Harvesting presented a series of investigations conducted by the organization. He pointed out that the number of organ transplant operations made in one hospital of a city in China is more than the number of transplants in the whole of Germany. A Chinese rebutted Dr. Torsten Trey's argument by saying that many Chinese people suffer hepatitis, it is normal that there are many organ transplants. While Dr. Torsten Trey pointed out that this argument shows that because there are many hepatitis patients in China, the qualified livers should be insufficient. It is not normal to do so many transplants. Dr. John Haas from the National Catholic Bioethics Center introduced some basic principles, assumptions and strict standard for implementation on organ transplants in the United States, so as to guarantee against abuse.

The audience was deeply moved by the speeches. At the forum's end, Mr. Kiniry, leader of the Ethical Society asked all the speakers to offer recommendations "of what we, as Americans can do."

Matas suggested people appeal to congressmen, government officials and staff in medical field to widely spread the fact about "a new form of evil on the planet."

A Philadelphia journalist's mother went to China two years ago for a liver transplant, and died one year after. The journalist said that he had gone to China first for his mother's liver transplant. He also said that his 59 year-old mother might not have died so quickly if she had not had a transplant. Moreover, if they had learned that the organ harvesting atrocities were going on, they might not have gone at all.

Ms. Fang, a Chinese doctor in Philadelphia introduced to the audience that she still remembered when she received medical training in China, and when they received fresh corpses for anatomy labs, there was not the slightest respect for the body. She had made some changes and had humanitarian awareness since she came to the US to continue her study. She believes in China there is no change in the situation, and that live organ harvesting could indeed occur in China's medical field.

After the forum, many in the audience continued inquiring and discussing while surrounding Matas and other speakers. They expressed their outrage, sympathy and shock. They did not leave until Matas had to leave for the airport to return to Canada.

Joseph Lung, whose parents are from Guangdong Province in China, said that he learned from the forum that there have occurred many things that should not have happened. The Chinese government (CCP) has been too cruel. He said he cried when reading these reports. It is inconceivable that thousands of people have had their organs harvested when they were still alive. Hitler slaughtered Jews in Germany during the Second World War and China [the CCP] is killing its people right now. It is very wrong!

Dr. Wang Congshu, visiting scholar of Bioethics at the Medical Institute of the University of Pennsylvania, said that he was glad to have the opportunity to attend the forum, believing that the subject was well addressed. He had heard about organ transplants, but had never expected that the situation was so serious, and it has gone so far as to harvest organs from live Falun Gong practitioners.

Freelancer Aisha Mhmed for the University City Review in Philadelphia said that he was pondering what Americans can do to help, and how to have more people learn about the atrocities. It is very clear that this is happening, it is human rights violation. Though it was not the first time that he heard about it, the media seemed to have been drawn by other human rights issues, such as Iraq, Sudan, and so on. Live organ harvesting has not become the topic arousing wide concern.

The Ethical Society of Philadelphia is a member organization of the American Ethical Union, a religious organization. Its members are a group of humanists or humanitarians.