Appealing to Chinese Students in Malaysia to Quit the CCP (Photos)

(Clearwisdom.net) 18 million Chinese people have withdrawn from the Chinese Communist Party (CCP) and its affiliated organizations. To support the trend, the Malaysia Quit the CCP Service Center hosted a rally in Nilai Township where two international colleges are located. The purpose of the rally was to inform the a few thousand Chinese students in the two colleges about the wave of quitting the CCP. Falun Gong practitioners joined the rally to expose the CCP's organ harvesting atrocities. 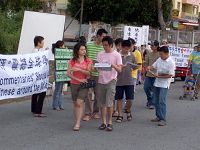 Chinese students learned about the wave of quitting CCP on their way to the market. 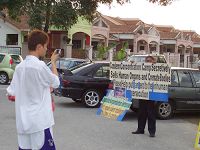 A Chinese student takes photo of display board with his cell phone.

Xie Guangli spoke at the rally telling the Chinese students that CCP is about to collapse and that officials at different levels are seeking channels to contact Quit the CCP Service Centers so as to save themselves and the country. Xie urged the students to treasure their freedom in the foreign country, to read Nine Commentaries on the Communist Party and quit the CCP and all its affiliated organizations.

Xie said he was a volunteer at Malaysian Quit CCP Service Center and they are obliged to let the international students from China to know the wave of quitting CCP. So they decided to come to this town.

"The effect of promoting withdrawing from CCP is very good at Nilai. We plan to come and host another activity in the future." He also called on the students to pass the information to their families and friends in China.

The volunteers arrived at the streets near a night street market. They set up banners stating "Support 18 million brave people withdrawn from Chinese Communist Party", "Communist Party is not China, Love the country is not equal to love the Party", "No Communism in Malaysia", "CCP IS OVER". Many students and others stopped to watch and accepted truth-clarification materials.

A few Chinese students took photos of the display boards with their cellphones. The volunteers called out "The heaven is destroying CCP, quitting CCP to be safe", "Return to the traditional Chinese Culture, dissemble Communist Party Culture", "No Communism, No CCP". Some Chinese were surprised to hear these words and their expressions were concerned.

In the night, the volunteers broadcast the Nine Commentaries on the Communist Party video on a large screen TV and continued to pass out fliers.