From January 31 to February 1, California State University, Fullerton held a 2-day Discoverfest to welcome new students. The university's Falun Dafa Club participated in the event and clarified the truth of the practice and the ongoing persecution in China to students and faculty members. 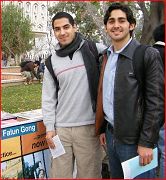 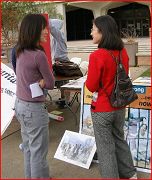 During the event, members of the Falun Dafa club displayed posters and distributed fliers in order to clarify the truth of the practice and the ongoing persecution. Many students commented that the Chinese Communist Party's (CCP) persecution of Falun Gong is not right and condemned the CCP's atrocities of harvesting organs from living Falun Gong practitioners.

A Japanese international student who once studied in Beijing stopped by the Falun Gong booth several times during this 2-day event. He asked for both Chinese and English versions of the Nine Commentaries on the Communist Party and said that he hated the CCP. When asked why, he said: "Does the CCP have anything good?"

During the peak time of lunch hour, many students and faculty members came to the Discoverfest. A Pakistani-American came to the Falun Dafa booth and told a practitioner how he had been following up with the organ harvesting atrocities. He said that he first heard about the atrocities in northern California. Back at that time, some people didn't believe the allegations were true. However, he did, and since then he has been following the developments of this issue. He left his contact information and said that he wanted to learn more about Falun Gong.

“Falun Dafa Has Brought Good Fortune to My Whole Family”