The "Truthfulness-Compassion-Tolerance" Art Exhibition was held at Georgia Tech for almost a month. The exhibition's final day was January 30, 2007. Artworks were displayed in two exhibition rooms. The first one covered the themes, "Assimilate the Fa and Return to the Origin," "Spread the Truth and Call for Justice," "Good Will Be Rewarded and the Evil Punished." The second exhibition room displayed artworks with the theme, "Testimony of Life. Righteous Faith Lives Forever." Visitors to the exhibition were deeply moved by the spirit and meaning of the artwork. 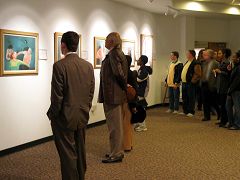 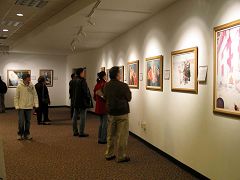 Visitors concentrate on the artwork, in deep thought

Many people were attracted to the exhibition, which ran from January 3 to January 30. They were deeply moved by the spirit embodied in the artwork. Many asked if the artists were at the exhibition and hoped to talk to them. Upon hearing that all artists are Falun Gong practitioners, they expressed their admiration.

Visitors were fascinated by the benefits of Falun Dafa. They were impressed with beauty of the "Buddha" and "Vow" and couldn't help saying, "Gorgeous!" Many took pictures of the artwork. In the second exhibition room, people were shocked to learn about the persecution of Falun Gong practitioners in China. They asked how such a cruel persecution could happen in China. Many took copies of the Nine Commentaries on the Communist Party and wanted to know more about the evil nature of the Chinese Communist Party. Some asked for more information about Falun Gong. They took truth-clarification materials. The flier about the group exercise site in Atlanta was very popular. Some people said they would like to learn Falun Gong.

Visitor wrote the following comments in the signature book:

"I am deeply touched by the beauty of the artwork and brave soul who bore with such suffering for their belief. I support you!" -- Mary and Bob

"I am saddened by the suffering they are subject to...God bless you." --Kala Monica

"I am very sad to see this persecution." --Julia

"Hold on to your belief! Never give up!" --Terry

Many people repeatedly thanked the practitioners for holding the exhibition.

A staff member of Georgia Tech studied the artwork carefully as soon as the exhibition was open. She said she cried about the persecution. She also told her friends to come visit the exhibition.

One man took some print materials to read and told other visitors about it. Many visitors went to listen to him. He became a guide of the exhibition.

A Chinese student who had just come from China was shocked at the exhibition. She asked, "Isn't it banned? How can the Chinese government allow you to do it?" After hearing that people in more than eighty countries practice Falun Gong, and that Falun Gong has received more than one thousand awards, she stayed to look at the artwork. She couldn't help saying, "Gorgeous!" when she saw the painting "Vow" from far away. She picked up a lotus bookmark and said, "It is so pretty! Can I have one?" When she saw the artwork about the persecution, she couldn't stand to see any more because it was such a great shock to her. A guide told her briefly about a few pieces of artwork. She realized that the persecution is true.

Several Chinese visited the exhibition but avoided the guide. They quietly took some truth-clarification materials in Chinese when the guide wasn't there. One man took some DVDs in Chinese for his Chinese friends.

“France: People are Concerned with the Ongoing Persecution of Falun Gong in China”